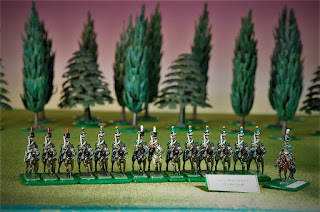 Recently I decided to tackle the first unit of Cavalry from the Tennant collection and get them back up to battle readiness.  The cavalry suffered the most in their trip across the Atlantic (with the exception of the artillery limbers).  Most arrived as if taking a sharp turn and had a 35-45 degree lean.  Fortunately the Hinton Hunt company must have used good quality metal, because there were only a handful of snapped ankles and most of the horses were easy to stand upright again.  There was however a significant amount of chipped paint that will need to be corrected as I tackle each new unit. 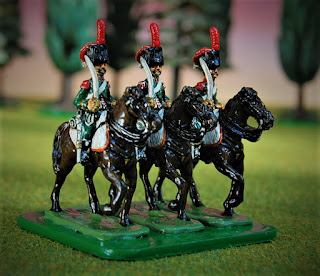 The Elite Company in their fancy Busbys with red bags trimmed in silver form the right wing. 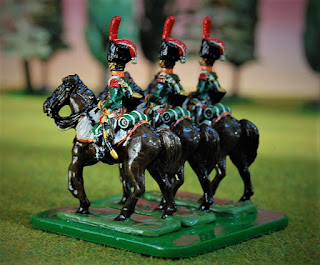 They are as beautiful from the back as they are from the front!  As is now fairly standard, the only significant changes to the figures is the addition of highlighting and a wash for shading in select areas, especially the flesh colored areas, as well as the horses.  The horses started as a very uniform enamel brown which really begged for some shading.  This is a super quick process (I just brush on some acrylic colored with black ink) and it makes a huge difference in the appearance of the figure. 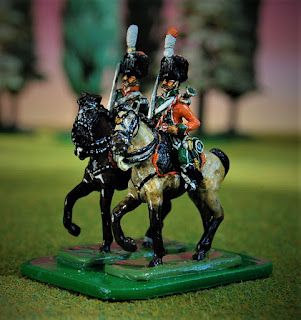 Originally painted as the 21e Chasseurs a Cheval, I decided to rename as the 15e since they were a part of the Army of Portugal that I am attempting to use as the model of organization for the Tennant collection.  The 21st had dark orange facings, the 15th, light orange.  With the addition of some high-lighting I felt like it was a justifiable change.  Here you can see some of the amazing customization work Mr. Tennant did.  I believe the trumpet and trumpet cord are both custom additions to the trumpeter. 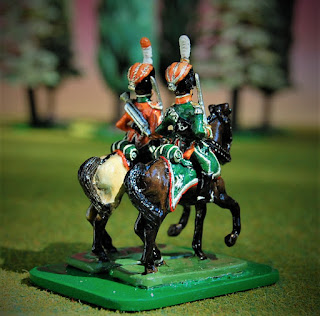 Now that I have had a little practice, I feel like my highlighting has become much more subtle and integrates much more seamlessly into the original painting. 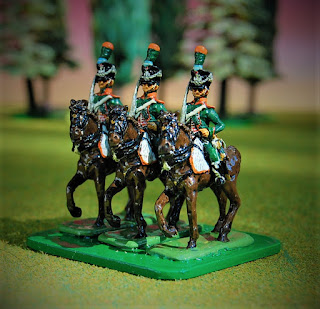 One of three line companies, each with its own distinctive lozenge below the plume. 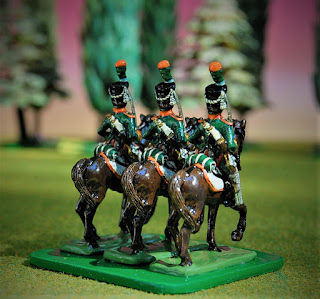 Oh my gosh the detail work! 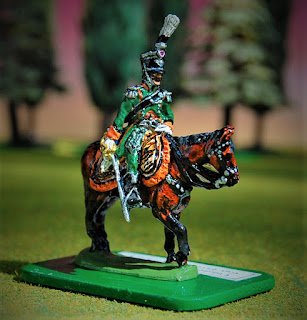 I didn't want to break off the officer from the trumpeter vignette so added a little gold to his epaulets and gorget to mark him as a major.  Above is an original figure that I have added to the collection to serve as their regimental Colonel.  This is an Art Miniaturen figure of Baron Meda, that is used here to represent Colonel François Jacques Guy Faverot de Kerbrech, who served with the 15th from 1811-1815 and was also made a Baron of the Empire, so I figure the fancy tiger saddle cloth might not have been too much of a stretch for him. 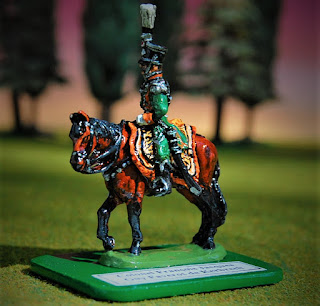 Love all of the silver bullion/lace on his uniform! 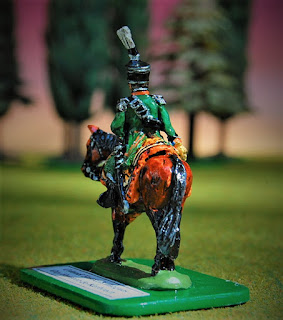 Size-wise the Art Miniaturen figures are a good match for the Hinton Hunts, even if just a wee bit bulkier. 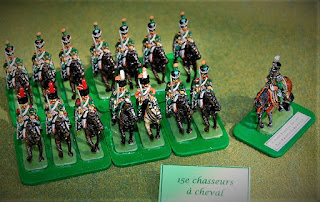 A shot from the new fangled hot air balloon overhead. 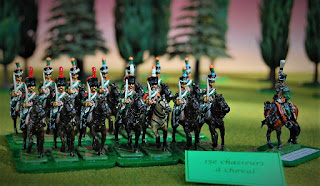 Changing the unit designation presented a unique problem, as each of the battalions in the collection has its own name plate.  I was able to find some green card stock that is almost a precise match and identify the font used (which took forever).  The version of the font I have is very slightly different, but so close as to be virtually indistinguishable from the original. 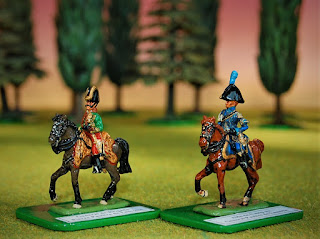 Now that the French have a couple of cavalry regiments (the 13e Cuirassier and the 15e above), I needed to get a brigade commander and his aide ready to command them.  Fortunately Mr. Tennant has done an excellent job providing appropriate generals. 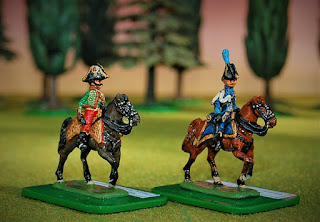 These figures really came out well.  The addition of the washes not only brought out detail in the horses, but also the detail in the fringe of the saddle blankets.  The amount of work it must have taken to paint all of the leopard spots is staggering! 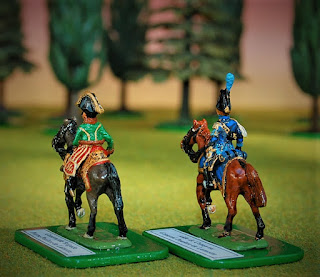 So for now I will ride off into the sunset like the General de Brigade and his Aide de Camp, but will return with a new battalion of Bavarians, which has been slowly progressing, but is now coming to the stage of painting where all of the hard work starts to pay off.
Posted by David at 10:14 AM