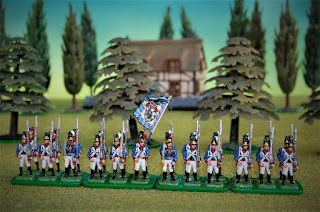 If you are a reader of my blog, you will know that these figures started life as metal copies of Airfix French Old Guard that someone had done a head transplant on and recast.  They were nicely cast with the exception of the muskets, which were stumpy and misshapen to say the least. 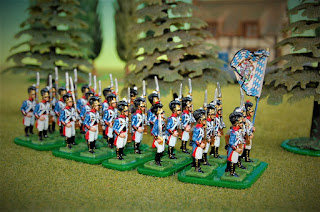 Fortunately I received some replacement muskets from Matt Golding and now they are able to march with pride. 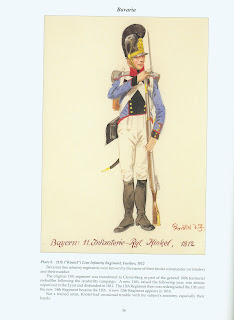 The next perplexing step was to make a decision on the paint for the jacket color.  The illustration by Knotel above shows the jacket color as quite light, which is commonly used when painting Bavarians.

Fortunately my friend Terry Webb, who is a walking encyclopedia of Napoleonic uniforms, was able to direct me to some period illustrations and even a surviving example of the color (I think), which tends to be a good bit deeper than that in the Knotel illustrations.

The officer's "caterpillar" crests tended to be quite lush compared to those of the enlisted men, but since I suspect all of mine came from converted Airfix British Royal Artillery, they are more equitable in their fluffiness. 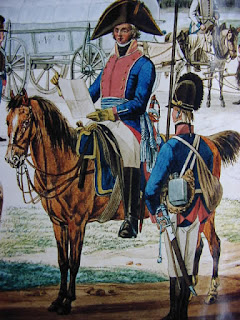 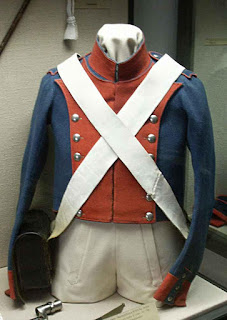 Not sure if this is a reproduction or a period piece, but yet another example of a medium blue as opposed to the more commonly depicted sky blue. 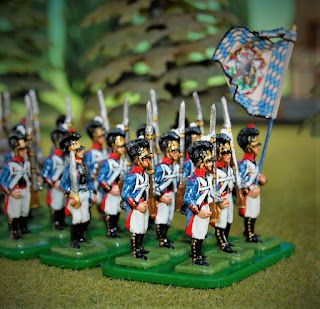 There ended up being a surprising amount of detail in these bad boys.  Well, bits of detail that had to be painted on for the most part, to be more precise. 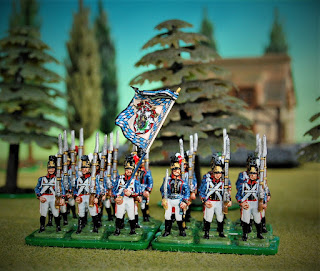 The  standard bearer is simply a converted foot soldier, the officers, a Hinton Hunt AN 14 Austrian officer with a head swap.  The intricate Bavarian flag was just too much for me to even consider, so this one came from the "Flag Dude". 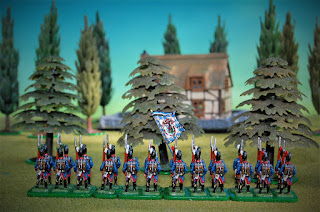 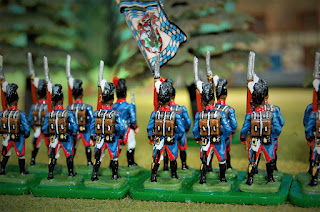 I was glad I took the time to black line the saber handles, which I thought set them off nicely. 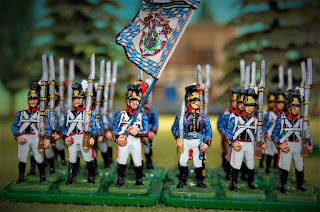 Given the lack of detail on these, especially the faces and straps, I am a bit reluctant to do close-ups, but here you go, warts and all. 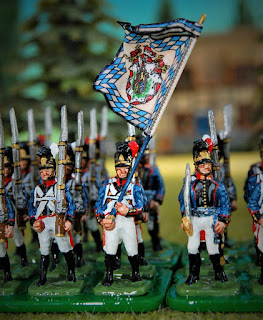 Some of these guys are not exactly handsome, but my goal was to make the faces look acceptable en masse, which I think I achieved. 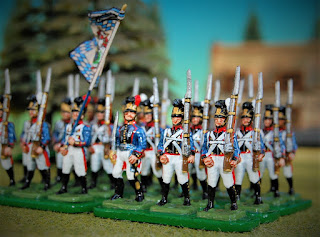 Very glad to have these done and off the painting table!  Next up the second battalion of the 39th French Infantry Regiment, some Narnian fantasy figures, and then some more 28mm Napoleonic Hussars.