This weekend my wife and I had planned a camping and birding trip to West Tennessee.  The weather turned a bit chilly for camping, but as I had already requested the day off on Friday to prep for the trip, I decided to keep it and spent the day roughing it with my pups (and did a little planning for the trip).  With travel and getting the study spruced up, miniature painting has definitely taken a nose dive in terms of output, but as I see it I am just building up for a jolt of creativity later.  Besides, it is important to shift gears and get outside on beautiful fall days. 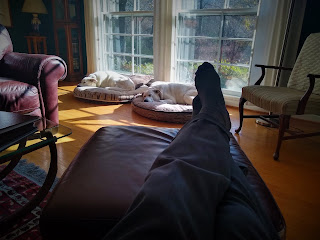 The pups and me enjoying a lazy Friday morning (above).  I did eventually have to get my rear in gear and go into the office for a brief meeting with my boss, but that was my own fault for scheduling a meeting on a day off! 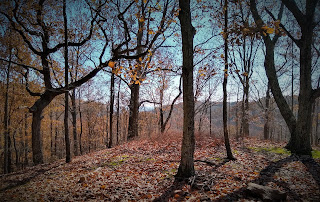 We started the day with a drive along rural highways to the Nathan Bedford Forrest State Park.  Yes, Tennessee has a state park named after the founder of one of the most racist organizations ever.  Despite the name, the park itself is beautiful, and the museum staff were some of the friendliest and most helpful folks I have ever met.  The park itself is somewhat secluded on the west bank of the Tennessee River and not terribly easy to access via a direct route.  On our five mile hike we met not a single other soul on the trails, despite the gorgeous weather. 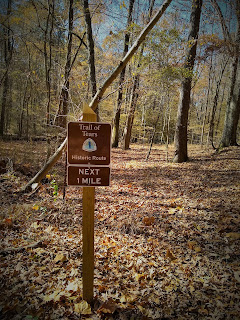 The park gets it name because it was a site of a Civil War action, in which Forrest cannonaded a Union supply depot across the river at Johnsonville.  Forrest claimed it as a great victory, but it may have actually contributed to Sherman's scorched earth policy as he marched to the coast.  With his supplies temporarily interrupted, Sherman was obliged to live off the land as he marched south, something he was only too willing to do, as he left a swath of destruction in his wake to cripple the South's ability to continue the war effort.

The park, frankly in my mind more importantly, also comprises parts of the historic route of the trail of tears, by which tens of thousands of Native Americans were forcibly removed and settled to the west in the Indian Territories.  It was indeed sobering to know that we were walking in the footsteps of such suffering. 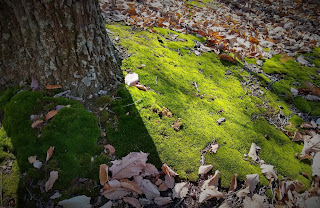 Despite the parks painful past, it truly is a natural wonder, with tall Oaks, Poplars and Beech trees on high hills surrounding the lakes of the Tennessee River created by the TVA's hydro-electric program.  Vibrant lush mosses were prolific along the leaf strewn trail and the crisp fall weather and changing leaves made for a spectacular hike. 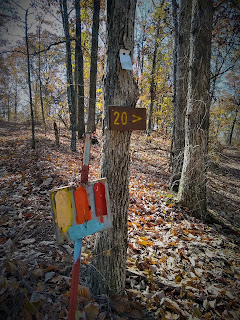 The park has an extensive network of trails with over-night shelters along them.  We took the five mile "orange trail", but for those with more time there is also a ten and a twenty mile trail, as well as a shorter three mile trail. 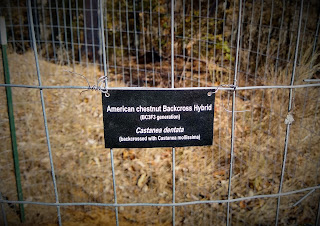 On our way back to the trail-head near the museum/interpretive center (The museum has a nice display about the economic history of the area .  Logging and the fresh water pearl industry were the mainstays of the economy.), we stumbled across these fenced off areas and were delighted to find they held saplings of the now virtually extinct American Chestnut.  The American Chestnut is being cross-hybridized with a similar Chinese Chestnut that is resistant to the disease that killed off this once most prolific of American trees.  There were three distinct species of the trees being grown here; the American, Chinese, and Hybrid cross of the Chestnut. 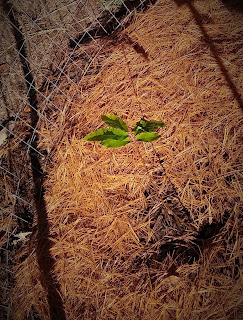 Above is one of the American Chestnut saplings. 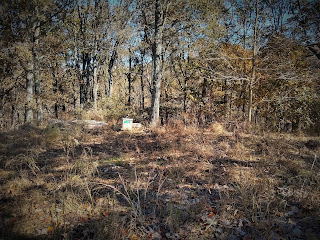 Next to the trees was also a bee hive.  We wondered if it was to ensure that cross pollination was naturally aided, but really have no idea why it was there. 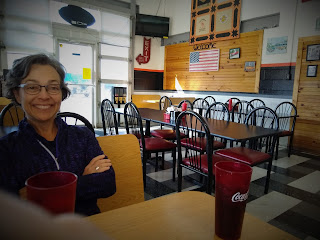 After a nice long hike Cindy and I filled our tanks at the "fillin' Station" in the booming metropolis of Big Sandy Tennessee.  The restaurant was a real slice of Americana as was the menu.  Talk about some heavy food!  When we got back home at the end of a long day, Cindy and I both were craving a heaping helping of vegetables!  Once again though, it must be said the folks we met there were delightful. 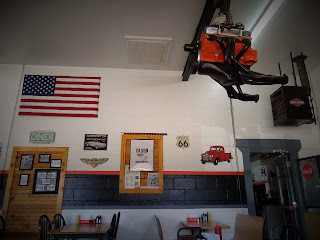 I'm still trying to figure out the engine dangling from the ceiling. 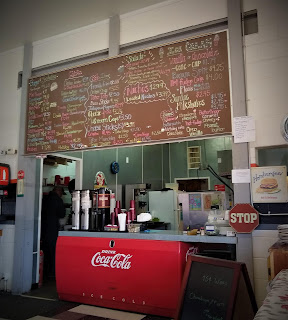 If you ever need a burger or anything fried - the Fillin' Station is for you! 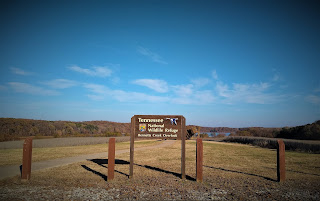 We ended our day at the Big Sandy Unit of the Tennessee Wildlife Refuge.

https://www.tn.gov/twra/wildlife/viewing-area/middle-tennessee/nwr-big-sandy-unit.html
There is a gravel road on which to access the refuge (not a loop so be warned).  At our first stop by a birding platform over-looking a sheltered breeding area along the river, we were immediately over-flown by a bald eagle and a red-tailed hawk.  With such a great start to this area we couldn't wait to see what all of the waterfowl in the lake was.  We set up our scope with great expectation, only to find hundreds of mallards, which are ubiquitous around here and can be seen in any local pond.  They are beautiful, but not exactly what we had hoped for. 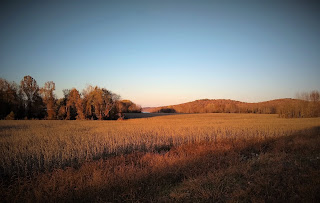 Above is one of the many vistas that can be seen from along the road.  They make for lovely birding habitat, but also just a beautiful place to visit.

Our next stop was along the sandy bank of Pace Point.  There we saw seagulls in large numbers, but struggled to identify a flock of waterfowl that were back-lit by the sun.  Unfortunately our presence spooked them and they flew before we could make an ID.  We were rewarded however, with a fantastic view of a great blue heron who virtually posed for us up in his tree while illuminated by beautiful golden light. 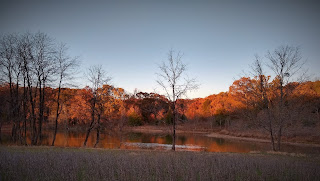 We were losing light fast and though the bald eagle sighting was a real stir, we had honestly hoped for a bit more variety, and then, just when we least expected it, we came alongside a small pond and spotted a dozen or so hooded mergansers (you can see their wake in the photo above, and maybe them too if you have really good eyes).  I don't believe I have ever seen them before and they were a stunning sight and simply delightful to watch.  Their elaborate crest can be retracted as they dive, so they would emerge from a dive and then shake off the water by flicking up their crests, which frankly was just kind of hysterical to see.  Just to add a little sweetener to this site, we also saw a belted kingfisher hanging out in the branches along the shore.  The photos below are courtesy of  All About Birds - a website maintained by the Cornell Lab of Ornithology. 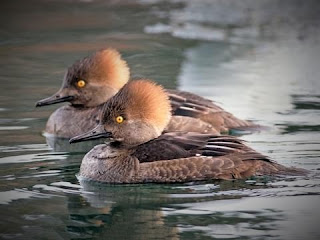 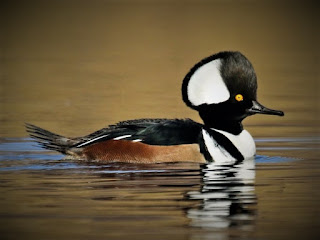 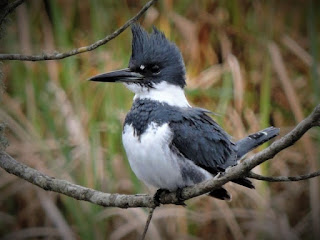 I thought my birding couldn't get any better, but sometimes you can find treasures at home too.  I hiked at Warner Parks this morning and was rewarded with a sight of seasonal visitors drinking from the creek behind the visitor's center.  One of my all time favorite birds: 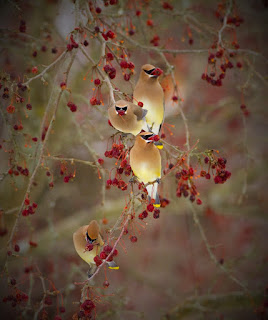