Hobby Friends From Across the Ocean and Steady Study progress

I had the distinct pleasure of meeting Mark Dudley this weekend for a tour of the nearby American Civil War battlefield of Chickamauga.  The battle in the Fall of 1863 was precipitated by the near bloodless capture of Chattanooga by the clever maneuver of the Army of the Cumberland by Union General Rosecrans.  A reinforced Army of Tennessee under Bragg tried to cut off Rosecran's Union army from their supply base of Chattanooga, and thus the battle began along the banks of Chickamauga Creek. 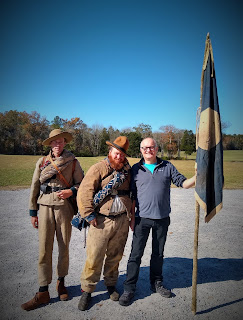 After a well lead ranger tour of the battlefield, Mark and I struck out on our own, only to meet two living historians coming in to pay homage to the fallen dead of Florida.  Joshua Corry (left from California) and Grahm Salisbury (middle), representing the A and F companies of the 4th Florida Regiment, were kind enough to entrust Mark with the duty of holding the Hardee pattern battle flag while posing for a picture. 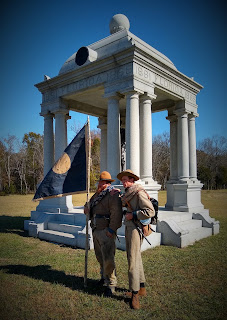 The full monument to the 4th Florida is pictured above.

Grahm was kind enough to provide a few links to the history of the 4th Florida Regiment: 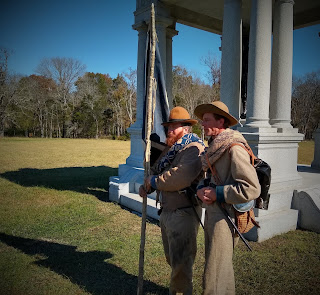 I did not envy these gentlemen all of the wool clothing on a beautifully warm and sunny autumn afternoon! 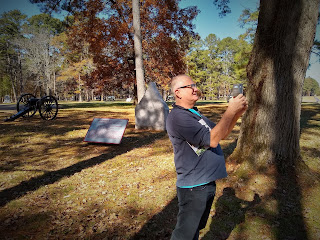 Mark getting a picture of one of the many monuments of the battlefield.  Chickamauga was the nations first military park.  It was created in 1895 with the preservation of 5300 acres of the battlefield, including much of the creek itself. 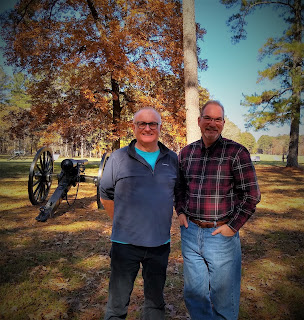 It was a distinct pleasure to share the day with Mark.  We talked shop about miniatures of course and painting strategies, but also ventured into global politics.  I very much valued the first hand insight regarding current British politics, as well as a great discussion around American attitudes, which was plainly evident when the Ranger asked the tour group why the soldiers on each side of the conflict were fighting here at Chickamauga. 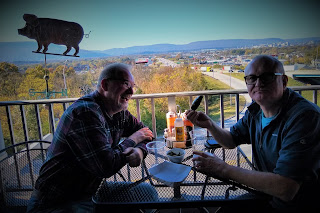 After such weighty discussions, it seemed only appropriate to end our time together with a good meal of southern BBQ.  Mark was even foolhardy enough to try one of the grilled Jalapenos!  I'm already lobbying for a trip to Yorkshire to return the favor of the visit, and perhaps head even a bit further north to sample the local distilled spirits....


And now in other news: 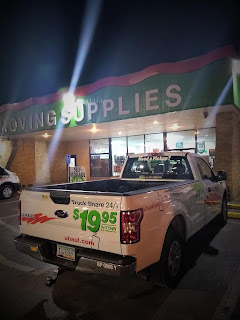 I have finally found a proper home for the Tennant collection of Hinton Hunt Miniatures.  It is a behemoth of a piece - the only kind of display case that could accommodate such a large collection.  I found it through facebook in a local estate sale, so off to the truck rental store I went, and with the help of my daughter and a good friend, we got the dis-assembled display case to its new home. 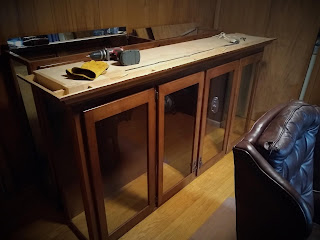 The case breaks into two sections, with the final assembled piece being 7.5 feet long by 8.5 feet high, and 16 inched deep.  It was a custom made piece from a cherry tree that was cut on the owner's farm, and originally housed a much loved doll collection. 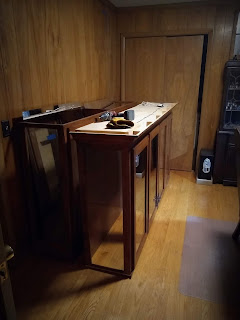 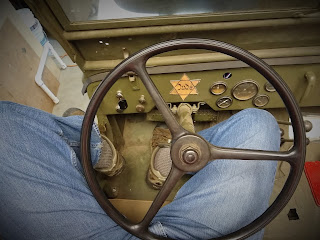 The move was far from easy, and in order to say thank you to my friend who helped, I spent three hours wedged into the front seat of his Willy's Jeep, helping him bleed the brake line.  Lets just say the Jeeps back in WWII weren't built for someone my size! 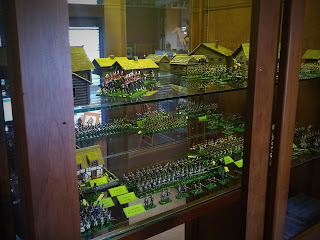 Starting to set up the Tennant collection to see if I will indeed have enough space, and if the shelf spacing is appropriate. 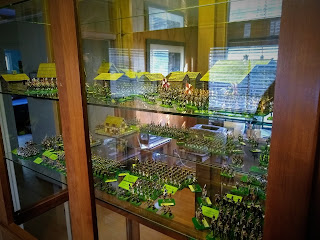 Can't wait to have them all unpacked.  Six months or more after purchasing Mr. Tennant's Hinton Hunt collection, I have still not seen it all out of the transport boxes displayed as a whole. 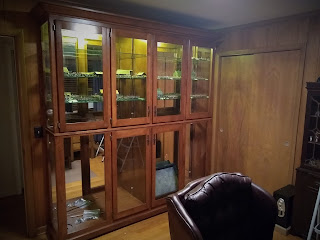 Here is the final piece assembled, but much work is still to be done.  The four outer panels were never installed as doors, but rather screwed in place, so I will need to get hinges and mount them as proper doors, not to mention find appropriate shelving and stain it to match.  Much left to do, but even so, the study is starting to take shape at long last!
Posted by David at 1:15 PM