The HYW English is my core army. I sold off all my old armies which were a mix of figures from various older manufacturers in order to focus on building more homogeneous (in terms of figure manufacturers) armies. The following was my first to meet that goal and morphs easily from Free Company, to HYW English, to Feudal English. 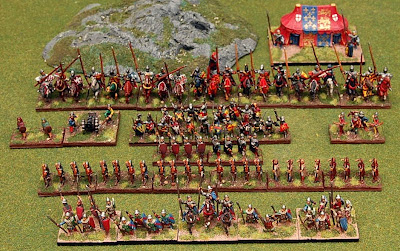 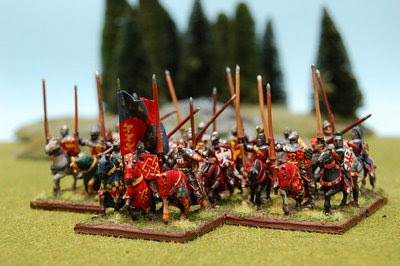 The Black Prince leading the way. I chose him as a leader since he would be appropriate for a free company army in Spain allied with Pedro the cruel vs Henry the Bastard and DuGueslin, or a HYW army in Europe. 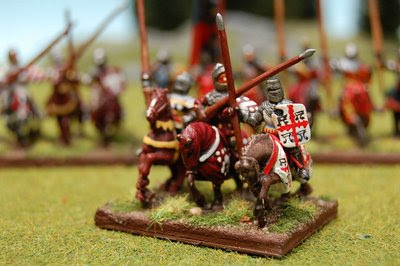 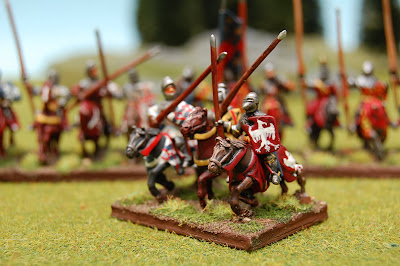 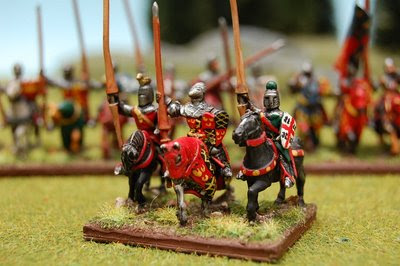 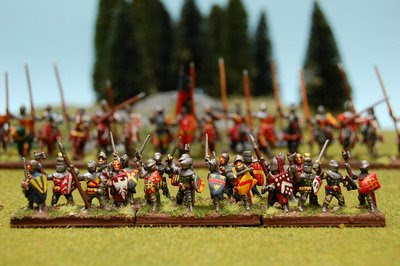 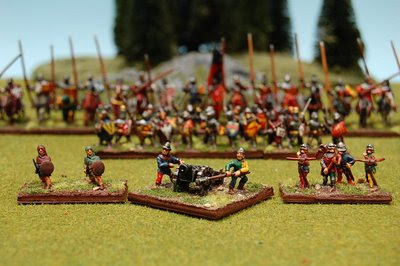 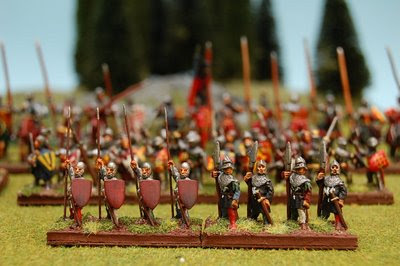 The Heavy infantry. The spears are in the green and white livery of welsh allies and the blades are in black with the white ostrich feather livery of the Black Prince himself. Some of them wear the leek on their shoulder which I think symbolizes their Welsh heritage, but I'm still not really sure of the story behind the leek. 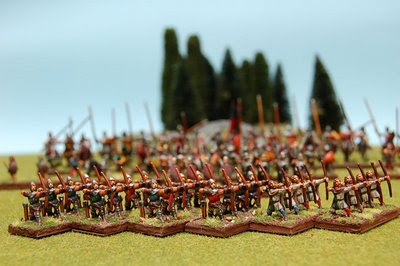 The longbows: heavy armored bows in back with more lightly armored Welsh bowmen in front wearing the traditional green and white livery. 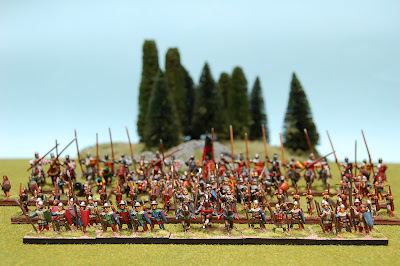 Here we have the additional elements necessary to field a feudal English army: 2 hordes, a spear, and dismounting cavalry and the three spear to represent them as dismounted. Eventually I will paint an entire feudal English army with more appropriate accoutrement's, but for now the HYW era elements will have to do.
Posted by David at 10:57 AM 7 comments:

This just in: The Von Beeren Kuirassiers are done. Now that I have the heavy Battle Cavalry, I have enough elements for the Prussians to take the field! 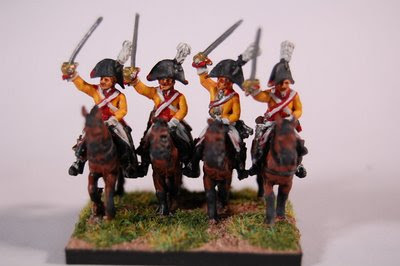 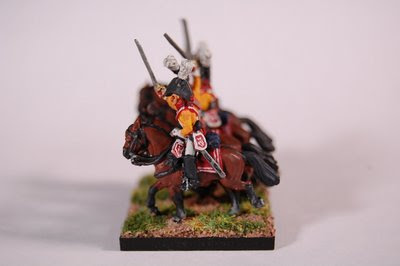 Here are some better pictures of the 1806 Prussians I have been working on. They are a mix of AB and Minifigs. The AB are far superior, but much bigger, so mixing the two has been a challenge. I am currently working on the Kurasiers and Dragoons which will finish out the army. 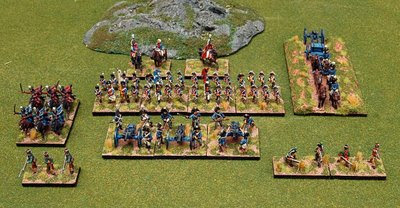 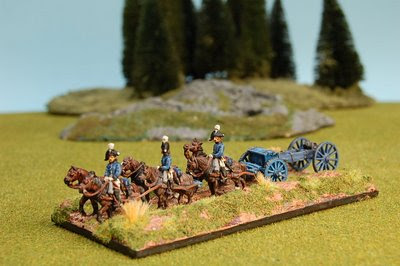 An Artillery limber which will serve as the camp for now. This is an AB grouping of marvelously sculpted figures. 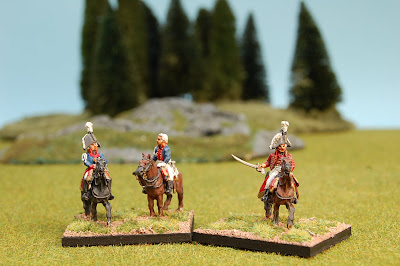 The general staff - or a bunch of old farts in white powdered wigs, except of course for Blucher, who is sporting the uniform of his famed red hussars. 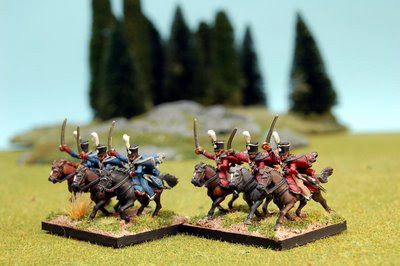 These are the figures that got me started on this project. Mark, "extra crispy" Severin gave me this Minifigs and some others when he was cleaning out his piles of old lead. I had to change the style of the Shakos to the earlier 1806 style, but otherwise they are very nicely animated figures. 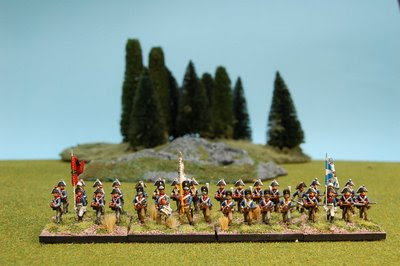 The infantry: Grenadiers in the center and muskets on the wings and behind. Each element is painted to represent a particular regiment. The grenadiers were combined from companies of four different regiments so each figure is painted in the uniform of one of those regiments. The Grenadiers in the middle with the flag are painted to represent a standing unit of the elite 6th battalion of Guard Grenadiers . This is a stand of mixed AB and Minifig figures. The minifigs are standing on cardboard shims to raise them higher and thus minimize the size difference of the two figure manufacturers. 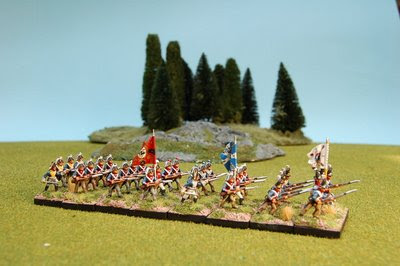 A side view to show off the pretty flags. All the flags are hand painted. 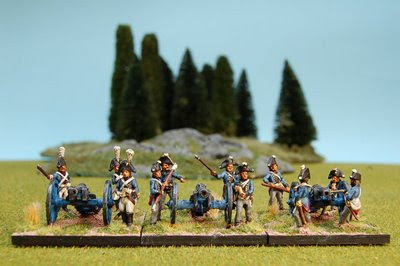 Excellent AB artillery figures. 1 horse artillery battery on the left, and two foot batteries on the right, one being hauled into position with bricoles and drag ropes or prolongs.

I have been working on a few odds and ends so I have decided to post my progress. The two main projects are a 15mm Narnian army for HOTT which I have just begun, and a 25mm Lord of the Rings army for HOTT which has been in progress for decades. The elves are Ral Partha figures sculpted by Tom Meier. Most of these are painted and just waiting to be based. The Orcs are about half done, but I have all the required figures for both armies and It shouldn't take too long to finish them. I have also revamped my camp for the Hundred Years War English that I have and made a Barker marker. Enjoy the pics. 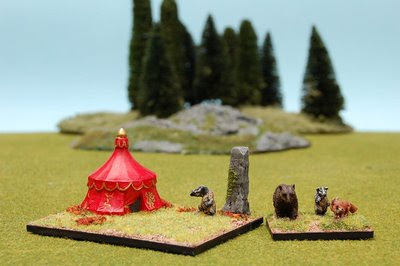 Narnian Camp and beasts element. The camp is Baueda, the badgers are from splintered light and the other animals from an old Ral Partha 25mm set, but they seemed to be the right size for the large Narnian animals. The standing stone is scratch built from insulation foam. 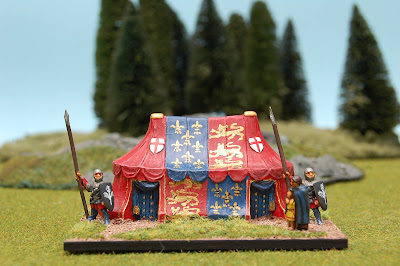 Finally the Black Prince will have a suitable place to rest. 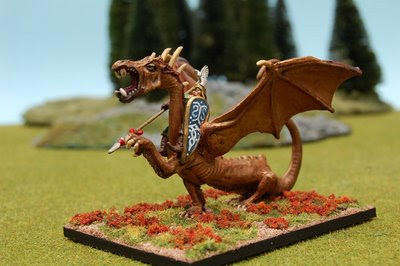 This is a conversion for my 25mm Hott Elf army. The Elf is a Tom Meier sculpt from Ral Partha, which I have placed on a dragon sculpted by Julie Guthrie? from the same era. The dragon had some considerable modifications to make the figure fit. 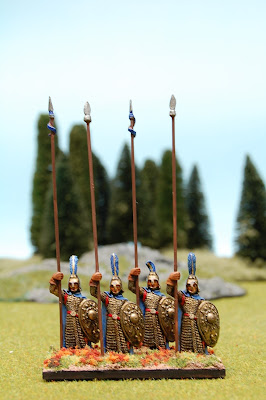 I must have had the caffeine shakes when I took this one, but you get the idea. Sea elf pikemen. 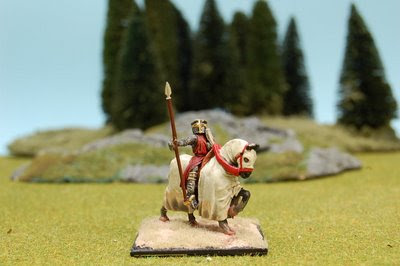 I needed a Barker marker for 15mm armies, so I used this old 25mm Ral Partha crusader to add a little uumph to the marker.
Posted by David at 10:18 AM 2 comments: