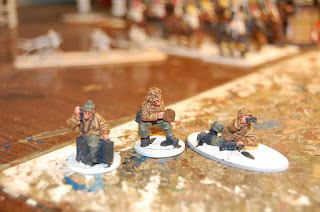 Some spotters cleverly concealed in the field of my paint blotches.  They will compliment my growing Waffen SS army for Bolt Action.  You can see below a 105mm Howitzer in need of some front line assistance. 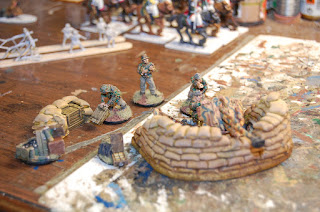 The artillery is a 105mm Howitzer from Warlord Games, the instructions for assembly were never discovered on their site.  I found the assembly instructions for just about every other artillery piece they make, but this one remained a mystery.  I only hope I didn't put something on upside down! 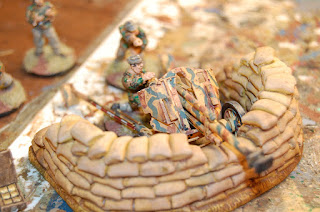 The sandbag emplacement and the sandbagged ammo storage are pieces made by Baueda.  The other scenic pieces came with the gun. 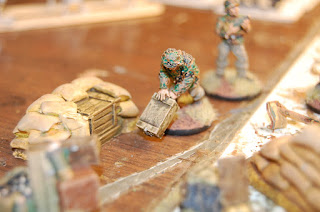 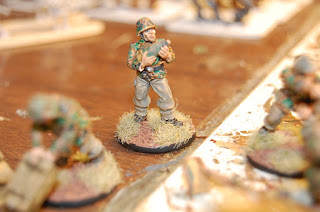 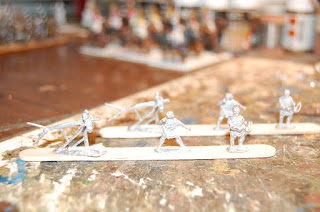 This was a fun discovery to make.  I have been watching HBOs Rome this week, so was inspired to revisit my pile of unpainted lead and found these gems by Testudo Miniatures.  The Marian Romans in the 3.0 version of DBA are now allowed artillery, so I thought I would paint them up. 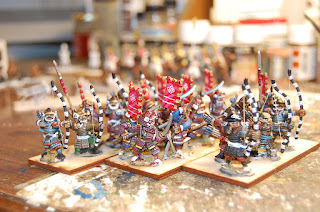 I took these Samurai (and a lot more of their buddies hiding in a box) as trade for selling off a bunch of stuff for a friend, and decided to spruce them up and base them for L'art de la Guerre.  They have a good basic base coat, albeit with some fairly odd color choices for the armor.  I've had to add back banners, swords and arrow bundles, as well as work on the highlighting and other detailing to add some depth.  Three units done and about 15 more to go.... 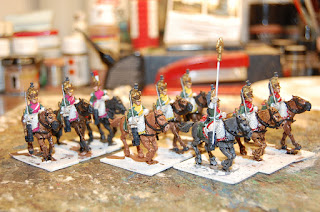 Lastly we have some French Dragoons in 1812 uniforms being painstakingly painted.  There is so much detail in these old metal foundry sculpts - probably not as nice as the new Perry sculpts, but their older work is nothing to sneeze at!  I have three different regiments being prepared for a Napoleonic variant of DBA that is just elegant and wonderful.  DBN - http://www.dbnwargaming.co.uk/  I really do love these rules when played with the optional rules for attrition.
Posted by David at 7:14 PM 1 comment: