Command Elements for Fields of Glory

While at Nashcon I heard a lot of good things about Fields of Glory (FOG) so I thought I would change some of the basing arrangements of my large big battle DBA Persian and Macedonian armies. The only significant lack I had was command elements, which are separate in FOG, whereas in DBA they are incorporated into a regular element. I found some Foundry packs on clearance at Nashcon, so was able to get many of the extra figures I would need. I also need to finish up a few light Persian troops and some Macedonian pikemen, but hope to have the army ready to go by the summer break. My idea was to be able to play FOG or BBDBA once I get the additional troops done. 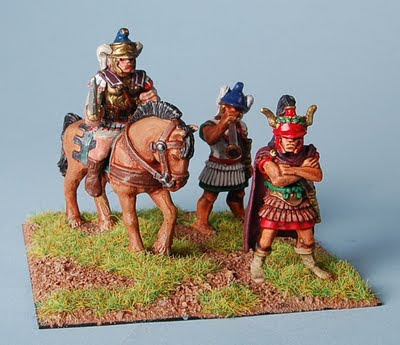 I have tried to incorporate mounted and infantry elements in the command stands as this mix of troop types helps to distinguish them on the field. The cavalry commander is an older paint job, done with a fair amount of drybrushing. The infantry are new paint jobs done by using washes and some deliberate highlighting. 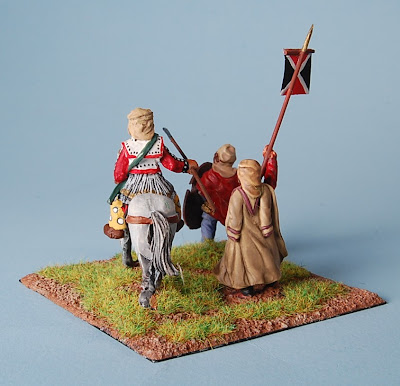 Finding appropriate Persian figures has been a real challenge, as most are made for the Xerxes / Marathon period and not for the armies of Darius which fought Alexander. Essex makes the nice commander with the standard. The horseman is from Old Glory and the swordsman is from 1st Corp. 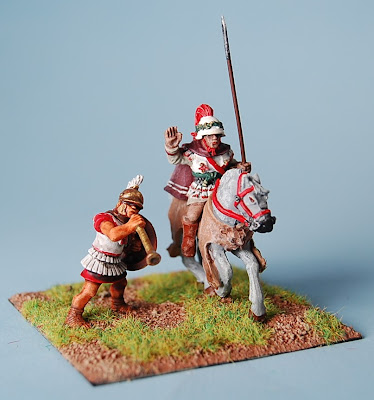 I love this figure on horseback, but every time I pull him out I want to repaint him, but so far I have resisted the temptation to do so. 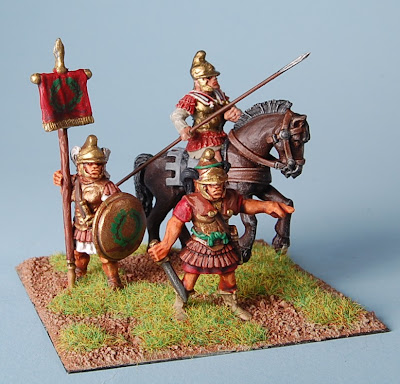 I rather like the way this element turned out. The horseman in back looks as if he is keeping an eye out for his commander and I just like the dynamic of it. 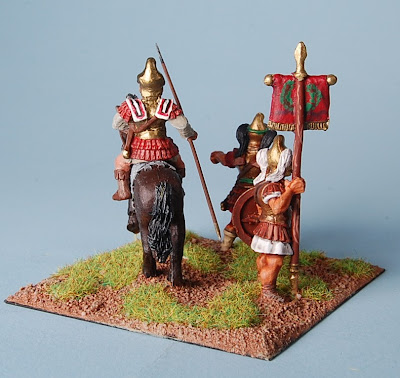 A view from behind. 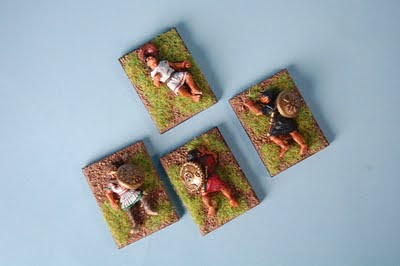 Not a great example of photography, but I also put together a few markers with casualty figures for disruption status. I'd love to get some of the Foundry Persian casualties, but at $20+ for five dead folks I think I'm going to have to pass.
Posted by David at 6:33 PM No comments:

It has been a long time since my last update. I guess Nashcon kind of took it out of me, but I have been slowly painting. Lots of small projects have kept me busy, like re-basing some of my 25mm Persians and Macedonians so that I can give the Fields of Glory rules a try. Grad school is also getting very serious now, and with working a full time job and going to school my time for painting has shrunk dramatically. School didn't keep me from dreaming however and I got a wonderful Eureka Early Samurai army from a fellow Fanatici and have been slowly whittling away at it. This army required much more research than usual, because I just didn't feel comfortable starting until I had a better understanding of the period and more specifically the armor and all of it's intricacies. I used several books on the samurai as a guide, but relied most heavily on the Heiji Scroll, a period illustration of a raid led by Minamoto no Yoshitomo, a relative of Minamoto no Yoritomo, who would eventually become the first Shogun of Japan and establish the Kamakura shogunate. Here is a link to a wonderful interactive website for the scroll: http://www.bowdoin.edu/~ktravers/projects/heijiscroll/viewer.html 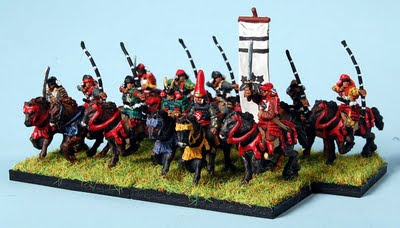 Here we have the mounted Samurai. The banner is that of the Minamoto clan, and though I don't know if he had a banner other than the present one, the command stand is meant to represent Minamoto no Yoshitsune, the brother of Yoritomo, and one of the most famous warriors of Japan. There are two very early novels about the period entitled Yoshitsune, and the Tale of the Heike, which details the actions of the Taira clan in their struggle against the Minamoto clan in the late 12th century. 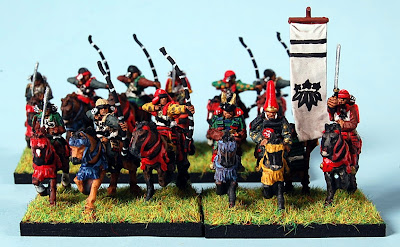 The layering of the Japanese armor is very complex and it took some time before I felt like I had a good grasp of how all the pieces fit together. The breast plate of this period was often covered in white deer hide and intricately designed, as were the turned back cheek protectors of the helmets. The armor was meant to be collapsible and the Japanese name for it means "box armor", because of it's ability to be collapsed and stored in a compact box. It was designed to collapse to accommodate a warrior as he sat on his horse and during this period was primarily an arrow defense, as the samurai still relied most heavily on the bow as their primary weapon. 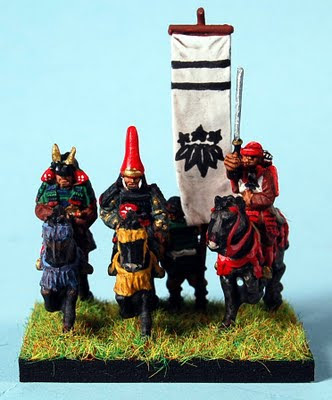 You have to love the helmets of the samurai commanders. It seems bigger was almost always better. The really tall hat is based on a much later helmet worn by Tokugawa Ieyasu, perhaps the most famous Shogun who established the Tokugawa Shogunate at the turn of the 17th century. 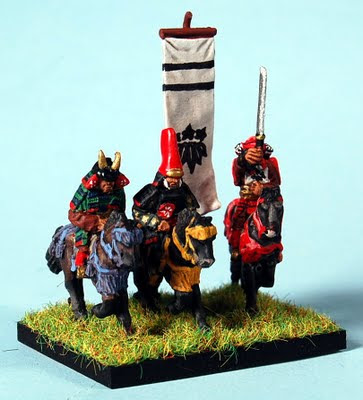 I tried to give the swords a shiny wavy line on the sharpened edge which is so typical of the Japanese blades. 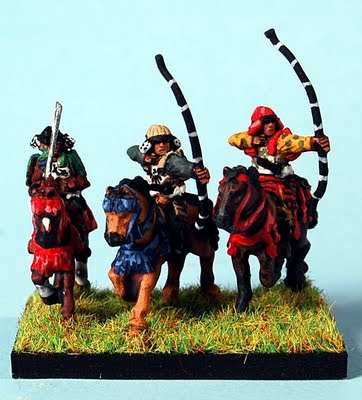 The horses have lots of tassels which I assume served as a protection from arrows as well as decoration. The bridle is slightly different from the western design as their is no strap over the nose connected to the bit. I gave some of the samurai patterned robes, but also a lot of just plain utilitarian robes, or ones with a subtle woven pattern that simply would be too difficult to try and paint at this scale. 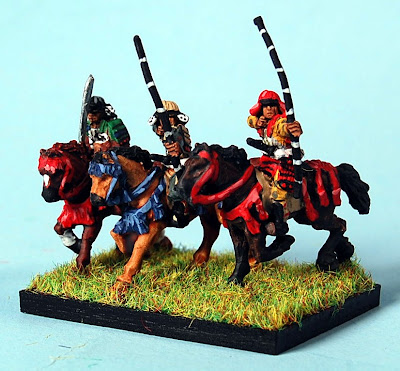 You can see here why I love these Eureka figures as the sculpting quality is just marvelous. These are hard to find on their site because for some reason they have been listed under the "Pirates" tab. They are available with Sashimono (back banners), but the samurai are really modelled on the early period. The Ashigaru are perfect for the banners however. 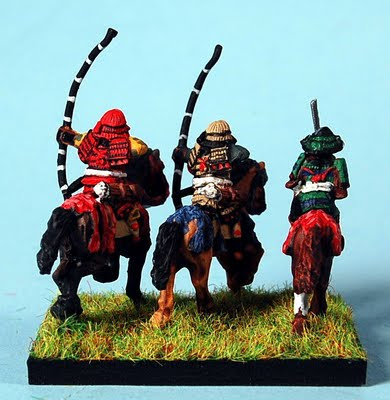 Here is a detail shot of the back. I used a black Micron pen to line the horizontal divisions of the laced armor. 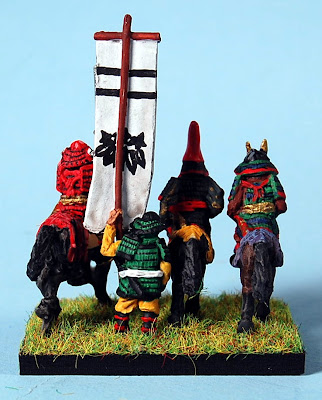 The command stand from the back

These are the lesser samurai and armed peasants that play as Auxilia. I started with these first to try and gently warm up to the period.

One of the strange phenomenons of Japanese warfare was the class of warrior monks. Many sons of noble Japanese families populated the Buddhist temples and so it was natural for them to have military training. There are also many elements of Bushido (the way of the warrior) which are closely related to Buddhist ideology. Warrior monks were often indistinguishable from regular samurai, but often wore a white head cloth or white robe as a sign of their religion. At one point rival warrior Buddhist monks almost destroyed the capital city of Kyoto.

A good shot showing what the back of the armor looked like. The small square shoulder shields were designed to move freely to accommodate the shooting of a bow. The arrows were held in a wicker box that held each arrow individually in a lattice-like structure.
Posted by David at 6:53 AM 8 comments: