Vimiero 1808 is the largest engagement I have tried thus far using Muskets and Marshals, so before having a full crew over to play I wanted to get in a test game.  To that end I had a couple of brave volunteers willing to brave the cool temps in my garage head over to test the game (Thanks to SD and JD for their enthusiasm and great ideas).  Once again the rules performed very well with results that seemed historically based.  I have been consistently pleased at how well this simple set of rules has performed.  I did make a few tweaks to accommodate my big battalions and I wanted to make sure they did not adversely affect game play.  Not wanting to give away the game entirely since there is another bigger game day planned, I'll just present a brief overview of the day's action. 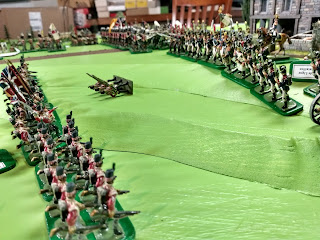 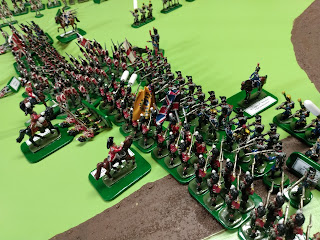 At this point it seemed like a good place to call it for the day, as the next phase of the battle was likely to take some time to resolve.  The game was a great test of the rules and really helped identify a few questions I need to ask, and most importantly, how to calculate the victory conditions and the timing of reinforcements.  Many thanks to SD and JD for their input and of course Stryker over on the Hinton Hunt Vintage Wargame Figures blog, for his development of the rules and willingness to share!

Terrain for Vimiero and Works in Progress

After taking over ownership of the Tennant collection and starting in on the repairs and re-basing, I thought it would be fun to recreate the early Peninsular War battles using the figures.  Little did I know what an all-encompassing and time intensive endeavor that would be!  The initial online battle was Rolica, fought with Wellington Man of New Zealand using a turn by turn passing of orders and each of us rolling for outcomes and fire results while half a world away.  Almost a full year and a half later I am finally knocking on the door of readiness for the subsequent battle of Vimiero.

The year is 1808.  The French have fought a successful delaying action at Rolica, but were nonetheless, resoundingly defeated in the field of battle by the aggressive tactics of the British and Portuguese forces under the command of Wellington.  Their sacrifice did however buy enough time for the French forces to combine and converge on the small town of Vimiero, where Wellington lay camped and hopefully (if you are French) unsuspecting of the rapid approach of the French army...

In the meantime I have been working on a variety of different modeling projects that have piqued my interest over the last month.

I hope you have enjoyed this rambling post.  The next post I had hoped would be all about Vimiero, but alas, I miscounted and need to prepare one more British battalion.  The 23rd Welsh Fusiliers are prepped and should be a relatively quick addition as I am only adding a few command pieces.  Until then, stay safe and happy gaming.