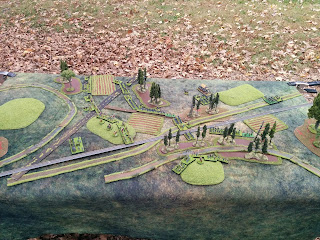 Last weekend we took advantage of a nice crisp fall day and recreated the Battle of Stones River in Murfreesboro, TN at the actual site of the battle.  We converted a picnic table into the center of the battlefield and played using 10mm figures and a variant of DBA called appropriately DBACW, available from http://www.dbnwargaming.co.uk/. 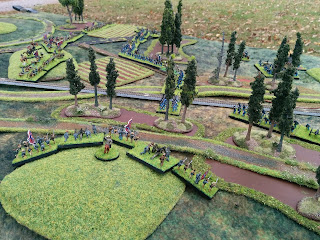 The confederates occupied the heights on the opposite bank of Stones river, and would launch an assault across the river on the second day, after the initial assault had stalled by the end of the first day. 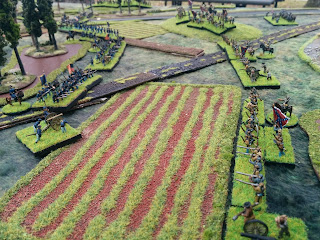 The Union forces try to hold a line after the initial shock of the confederate assault.  The Union brigad seen at the far top left of the photo was the only Federal position to hold the line both in the actual battle and in our recreation of the day. 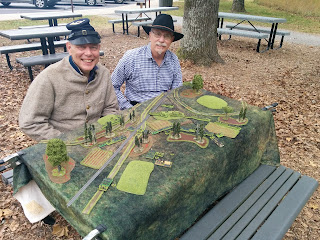 The Combatants: Pete Duckworth and Terry Webb.  Pete had traveled all the way from England and was the inspiration behind the battle at the battlefield, having fought Nasby and Edgehill (I think) from the English Civil War when Terry was visiting across the pond, at the site of those battles. 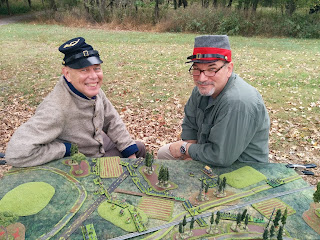 Terry found a kepi and jacket for Pete to wear to celebrate the occasion, and as the "umpire" and Confederate left wing commander, I donned a Confederate artillery kepi picked up at a local re-enactor's store. 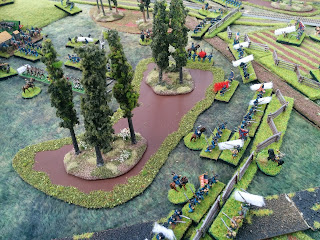 DBACW uses an attrition system for moral to simulate casualties.  One white pipe cleaner indicates shaken status, two equals badly shaken.  A red marker indicates a shaken unit that can not be rallied.  The Federals started the day strong, but an unfortunate series of bad rolls led to a cascading loss along their right flank, as confederates from other parts of the battle, began to appear behind the Union right flank.

All in all a great day.  The Confederates squeezed out a victory in the end that closely resembled the actual combat results at the end of the first day.  In the actual event, by day two however, the Union forces were in a strong defensive position along the railway line and decisively beat back the outnumbered Confederates with massed artillery as they tried to assault the Union left by fording the Stones River.