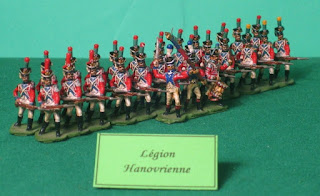 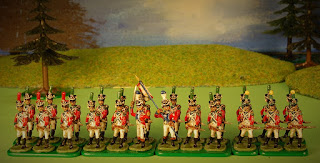 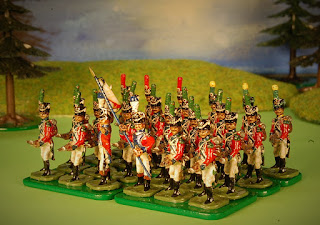 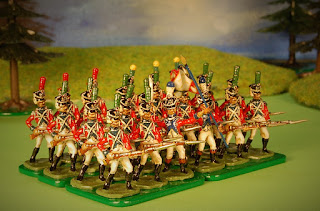 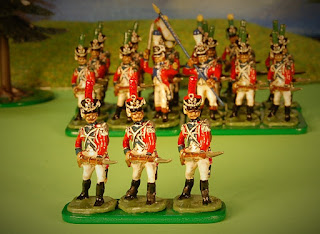 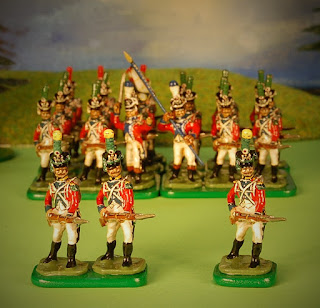 Scots, Scots Everywhere, nor Any Dram to Drink

The Scots arrived in full force this week, but scotch whiskey has gotten so expensive I fear my ability to have a dram in celebration is going to be severely curtailed!  Nevertheless I poured a wee glass of Macallan and tipped it back in honor of the brave men of the highland regiments.  Below are the 92nd "Gordons", the 42nd "Black Watch" and the 71st Highland Regiments.  Most of the credit of course belongs to Dick Tennant, the original painter, but I have added a few figures along the way, as well as some additional detailing, general touch up, and the regimental commanders.  The end result is in all humility, spectacular! 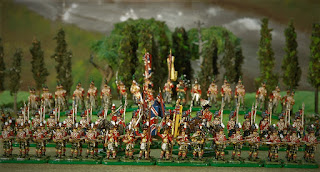 The Gordons taking the lead! 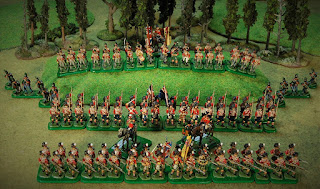 I love the big battalions of the Tennant Collection.  With 36 figures per battalion, a line formation starts to resemble the famous descriptor of the thin red line. 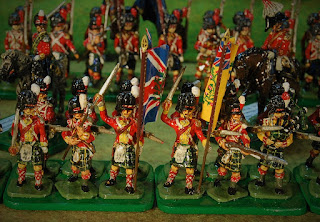 Here I added a couple of Der Kriegspeler copies of the original Hinton Hunt figures to bring the unit up to strength.  The NCOs (one with halbard and the other to the right of the regimental banner) are additions that were added.  The halbard is a customized metal spear that replaced the figure's original musket.  The detail on all of these is mind boggling.  So glad I only had to paint two from scratch! 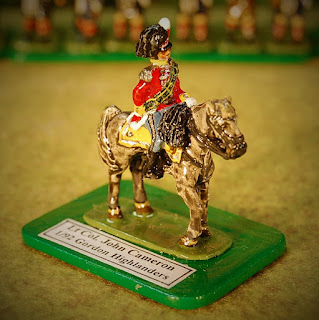 Above is the finished figure representing Lieutenant Colonel John Cameron, regimental commander of the 92nd.  This Der Kriegspieler copy of a Hinton Hunt mounted French Marshal, has had a number of additions.  Most notably of course is a head swap with a Highland soldier.  The kilted sash was modeled from "Green Stuff" epoxy putty.  The horse blanket was also squared off, a sheepskin holster cover was added, and the riding boots shortened to match British style. 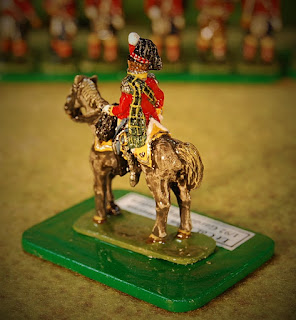 Color balance is always a bit tricky given the indoor lighting sources.  Colonel Cameron's horse in actuality appears much more grey than in these photographs.  The rendition of the color in the square formation (2 pictures below) seems more true to life. 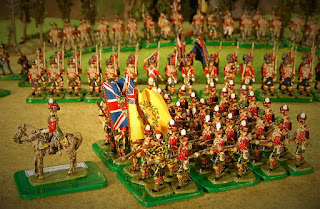 Colonel Cameron leads the 92nd past the watchful eyes of the 42nd, 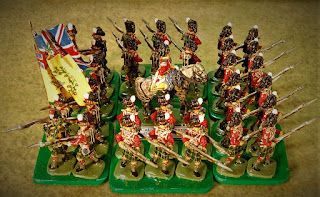 and into square should any enemy cavalry appear.  One of the benefits of the larger battalions is that there is actually room for the commander to shelter inside the square. 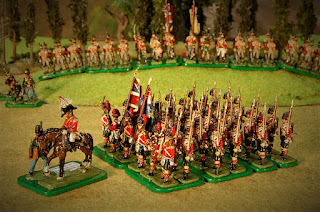 Not to be outdone, the 42nd forms column and follows the 92nd, ably led in this instance by Brigade Commander Major General Kenneth Alexander Howard, who confers with Lieutenant-Colonel William Williams of the 5/60th rifles before heading on. 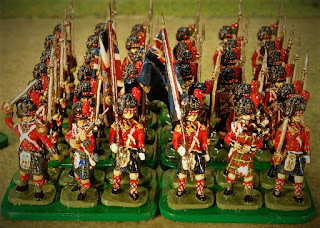 Once again the only imposters for the 42nd are the two Der Kriegspieler copies on the far left; the officer on foot and the color sergeant with a halbard.  The regiment is presented as originally painted by Dick Tennant, with the addition of new flags to replace those that were too severely damaged in transport, and the two aforementioned DK figures.  All were touched up, highlighted, shaded, given a protective glossy varnish and then remounted on movement bases. 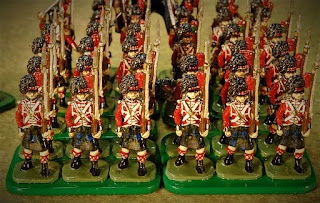 I also added a few squares of what I hope is a subtle blue to the kilts to catch the addition of a little color that was lacking in the original paint scheme of the standard government kilt pattern. 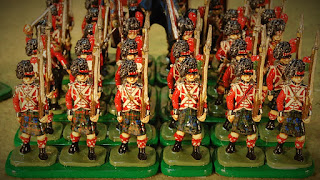 The Grenadiers and light companies are shown in the photo above.  Mr. Tennant has given the grenadiers an extra red stripe in their kilt, something I have never been able to verify was done in actual practice, but I opted to stick with the design to stay true to the original paint and also because if he painted them that way, he probably has an obscure reference to it tucked away somewhere.  His research on these figures was extensive! 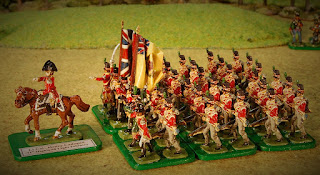 The 71st has graced these pages before, but in the end I decided I wanted to add standard bearers.  Mr. Tennant had not done so due to their designation as light infantry.  While there may have been many times the colors were not carried in the field, I wanted the unit to have them for those times they stand firm as a formed unit. 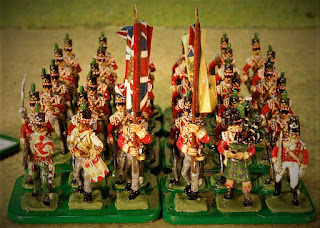 The color bearer and drummer figures are from the Kennington/SHQ line and fit nicely in size with the Hinton Hunts.  The standard bearers were sculpted to be NCOs I suspect, with shoulder tufts and wearing backpacks.  I thought the addition of the backpacks fit well with the light infantry roll, but added ensign's shoulder insignia.  The idea of young ensigns carrying their own backpacks while holding the colors has some appeal to me. The reversed colors on the drummer is also speculative, but I suspect not too far from what was worn. 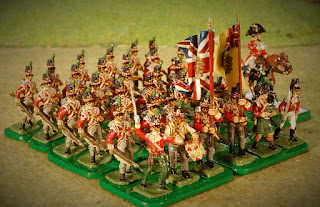 The flags of the 42nd and 71st are by GMB, but due to the size, had to be scanned, enlarged and reprinted before installing.  I also highlighted with paint to minimize the look of a "pre-printed" flag.  Considering I got the Union Jack of the Gordons upside down in my attempt to free paint, I think I will be sticking with the GMB flags! 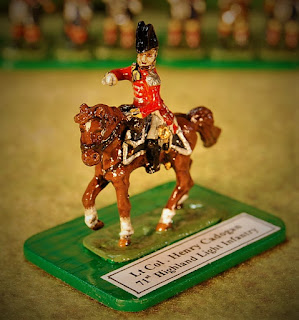 Lt-Col Henry Cadogan of the 71st also got a wee bit of a repaint, but honestly the poor guy could have used a face lift.  Talk about a face only a mother could love!  Sometimes these DK figures have been through the ringer, and I think this poor figure fell on his face one too many times. 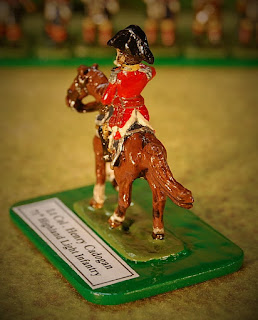 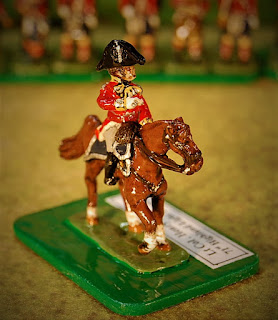 I was just reading about a young ensign who was horribly disfigured by a saber cut while defending the flag.  Maybe he got a promotion and ended up commanding the 71st! 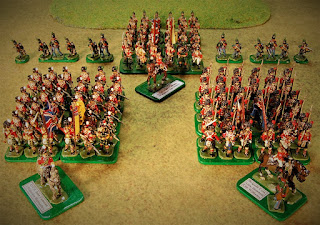 Elements of the 1st Division, 2nd and 3rd brigades preparing to march out on Rolica!

Can the chase the French from the high ground and move on to victory at Vimiero?

Personally, I think they can.  This is a fearsome looking crew, but I suspect the real key will be in the large number of riflemen that were present.  Both the 95th and 5/60th were present at Rolica in large numbers, so they are up next in the painting queue. 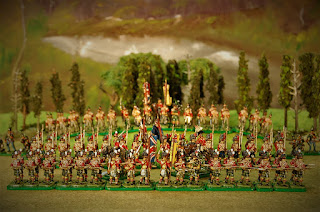 Till next time, stay safe and happy painting!  If you made it this far remember to follow my blog because you are either a nut or actually enjoy painting these little guys!
Posted by David at 1:12 PM 24 comments: