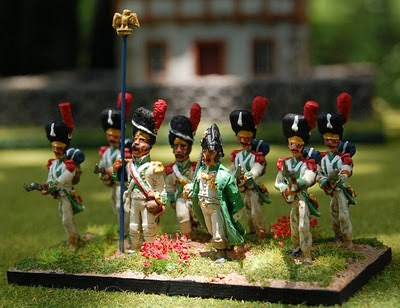 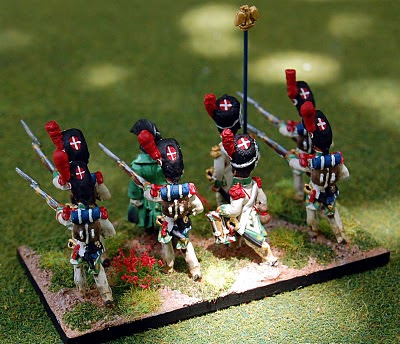 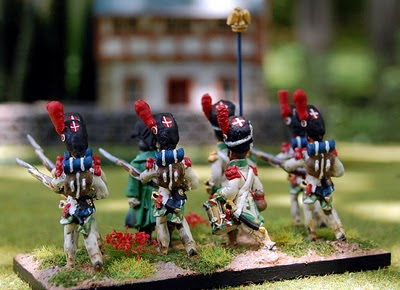 The Italian Velite Grenadiers are not quite as well documented in terms of uniform detail, but I have tried to paint a unit as it would have appeared around 1808/09. Once again this is a mix of figures that I had lying around without a purpose, so I was glad to be able to find a use for them. The privates are Hinchcliffe miniatures that I stripped and repainted, the command figures are Old Glory I believe. The Velite Grenadiers did not have a flag, but I do believe were given an eagle.
Posted by David at 11:36 AM 4 comments: 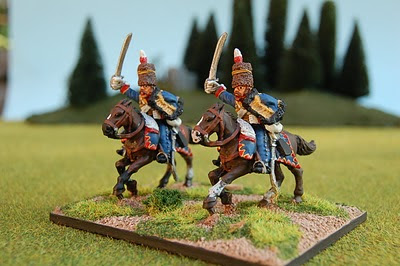 The King's German Legion 1st Hussars are the last element I needed to complete my light Division for the Peninsular British Army. These are Foundry figures which are just beautifully detailed, indeed a little too detailed. I kept finding more and more little details that were sculpted onto the figure that I realized would need painting to stand out. A good problem to have I guess. The 1st Hussars KGL are represented by a skirmishing cavalry element because of their comparatively small size and the way in which they were used. 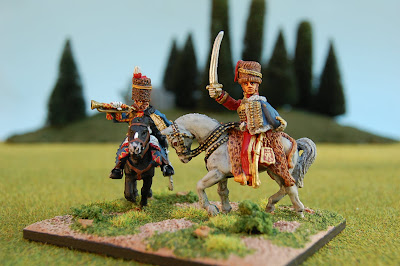 I decided to remount my General of Hussars with a trumpeter from the 1st KGL to convert him into a much needed British command element as opposed to an aid de camp that he was mounted as previously. You have to love anyone brave enough to wear yellow boots though! 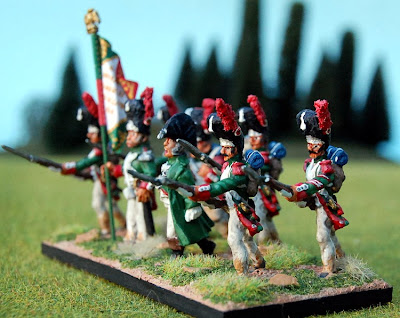 So I had a great, but busy weekend, part of which was spent finishing up the Italian Guard Grenadiers. I found a great French language site with excellent plates of the Italians which I found to be of enormous value, as my usual sources left a few questions unanswered. The figures are a mix of Foundry (the command and drummer) and older Hinchliffe figures that I stripped and repainted in a painstaking but rewarding process. The figures were all plumeless, so I made new plumes from cut down pipe cleaners which ended up working pretty well. I also had to construct new bayonets for a number of them, but all in all the Hinchliffe figures, though not inspiring by any means, turned out to be fairly decent. Note the corporal at the far right, the French site proved invaluable for details on non-coms as well as the officers and musicians.

The napitalia site lead me to the French language site. Here are the links:
http://napitalia.org.uk/ 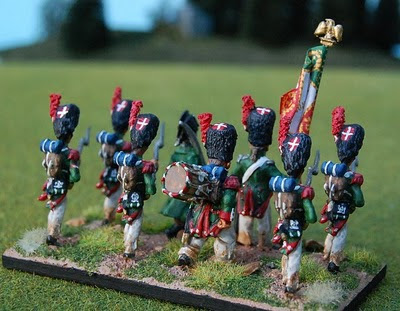 The Generals view of his troops. 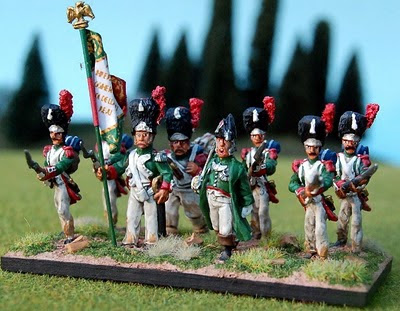 The enemies view staring into the glinting bayonets and imposing gaze of the grenadiers. The flag is just a free download from warflag. I didn't even bother painting over it as I thought it looked darn good right out of the inkjet printer. Next stop, the Velite Grenadiers.