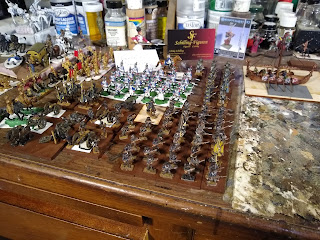 As always seems to happen, whenever one project is nearing completion, I get sucked into another.  The Der Kriegspieler French Napoleonic Fusilier Chasseurs of the Middle Guard are coming along nicely, so of course something had to come along and delay their final completion - namely an army of 15mm late Prussians for my DBN collection. 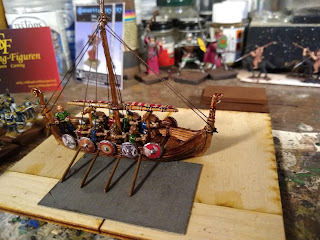 Well, this ship/camp scene has been coming along as well, but in all fairness, I think I started it before the Fusilier Chasseurs. 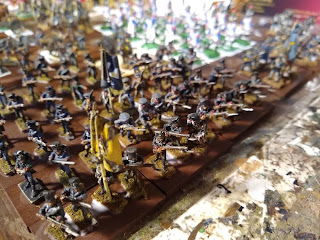 The Prussian army was a bargain find at the Siege of Augusta, and came with enough pre-painted figures for almost a complete army, and enough unpainted lead to fill in any blanks.  Most are older Naismith figures. 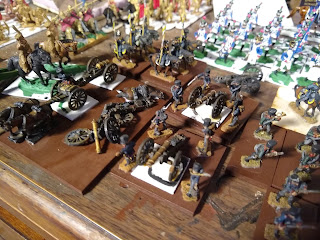 As you can see the army contained not only a couple of elements worth of artillery, but also enough to make a camp scene with a limber and some destroyed artillery.  Once I paint a few elements of cavalry the entire force will be ready for basing.  Fortunately the purchase came with all of the figures necessary.  Now I just have to decide which type of cavalry I want to paint. 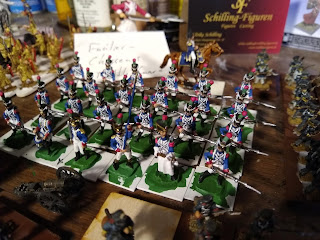 Won't be much longer before these are done.  Mostly just need buttons, lapel and cartridge box badges, as well as sword knots and they should be good to go.  Well that and a little highlighting, especially on the coats. 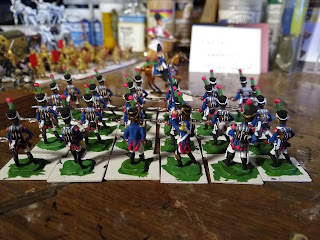 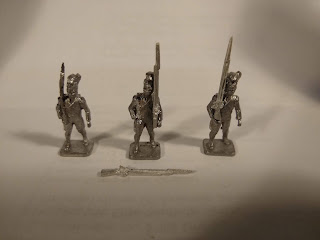 Thanks to the generosity of one of our fellow enthusiasts, I received enough rifles to begin the upgrade of the Bavarians I mentioned in an earlier post, that turned out to be modified Airfix Old Guard Grenadiers.  On the left is the original figure I received, now cleaned of all the old paint.  You can see the rather clumsy attempt at a musket. 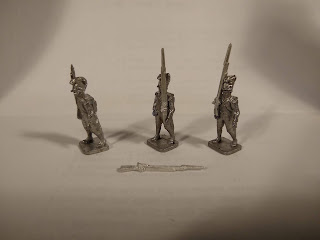 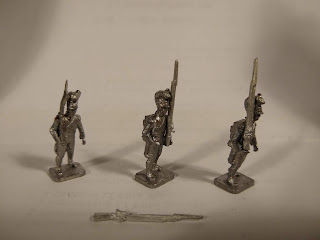 The Perry brothers sculpted their Bavarians with the muskets held in the left arm, so I am inclined to think this is more correct, but I have not tried to research the military drill of Bavarian Napoleonic soldiers.  I'm inclined to put the musket in the left hand, as I think that is a more normal placement and position of shouldered arms in this period, but would love to hear from any of my readers who might be more knowledgeable on the subject.
Posted by David at 8:02 PM 10 comments: