The battle begins on the slopes of the hills to the South of Rolica, just by the small Portuguese village of Columbeira.  The small French force of five battalions has occupied a line of hills covering about a mile, in the hope of delaying or stopping the British advance on the French main force, still gathering miles to the rear.  Lord Wellesley, the future Duke of Wellington, is fresh off the boat and leading his small allied army into Portugal to chase out the hated French.
https://www.britishbattles.com/peninsular-war/battle-of-rolica/
Turn 1

Suddenly the ground shook - "Well that starts the ball!", the future Iron Duke exclaims to his staff.

This has been an enjoyable battle and so far managing the turns via email and an interactive map has worked well, an example of which is below: 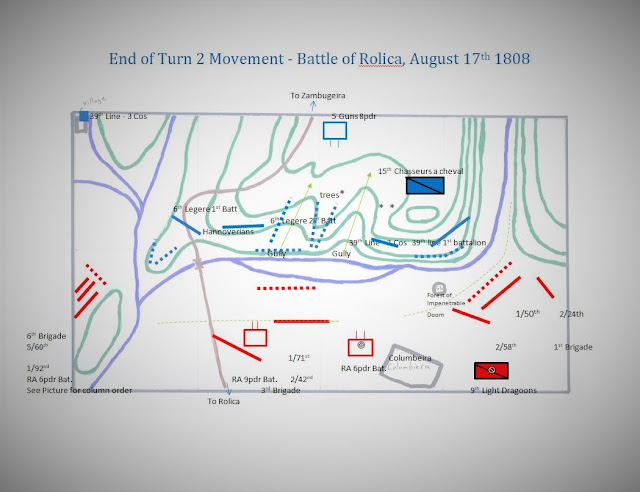 95th Rifles and Foot Artillery Added to the Fray!

I recently added twelve standing firing riflemen to the 95th Rifles regiment.  Originally painted by Dick Tennant as a battalion of 24, I wanted to bring them up to their full strength of 36 figures.  They will then be distributed throughout the corps in companies attached to the various brigades to provide a screen of effective light infantry skirmishers.  For the upcoming battle of Rolica about half the battalion strength was present, along with the full battalion of the 5/60th rifles.

Lastly I wanted to send a shout out to Ian at SHQLTD.  The SHQ / Kennington figures are nicely sized to be compatible with Hinton Hunt figures.  Ian has given me top notch service and I would encourage folks who are not familiar with the line to give them a try.  Below are some Brunswick Oels riflemen conversions from SHQ figures with Der Kriegspieler heads.  The officer is an SHQ Brunswick lieb Infantry officer I believe.  I have some British artillery on order so will let folks know how they compare when they arrive.

I decided I needed a little inspiration to help push on with the painting of the 95th rifles, so went ahead and laid out as much of the terrain and the units in an approximate fashion as I could for the assault at Rolica. 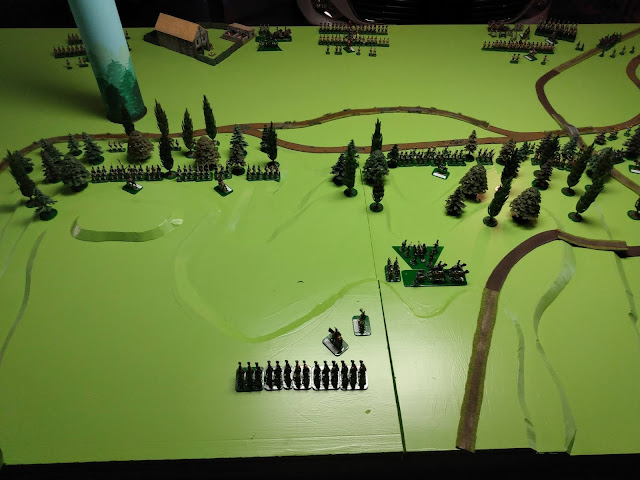 The French have lined the steep hillside with infantry, leaving their cavalry and artillery in reserve on the more open ground of the hilltop. 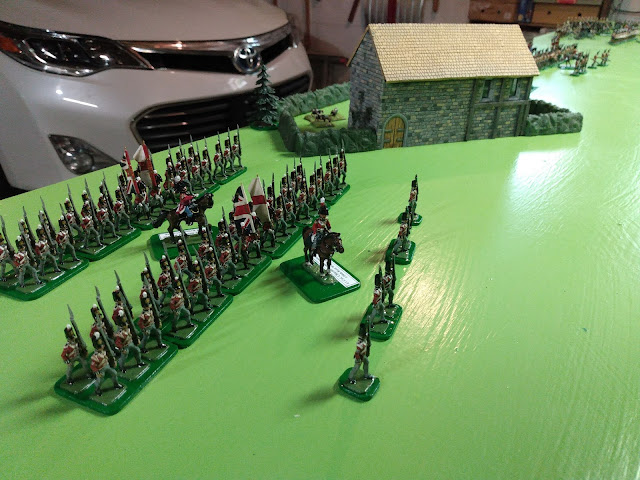 To the left (from the French perspective) of the village of Columbiera, two battalions of British infantry advance.  I just hope my wife never decides to take out the battlefield with her car!  The perspective is a little deceiving and there is actually a good 4-5 feet of room between the car and the battleboard. 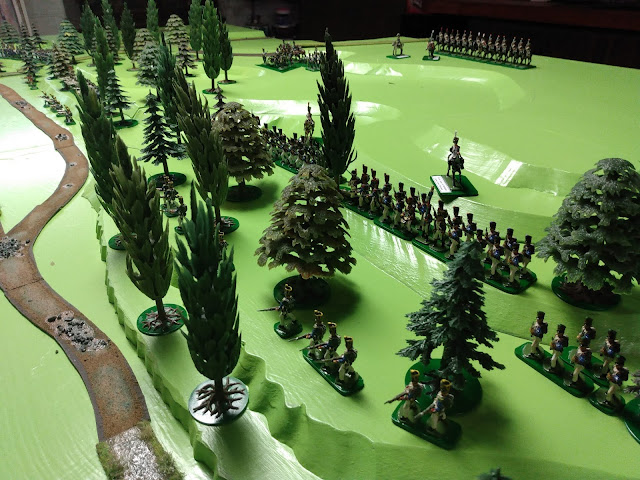 The British on the French left flank will be forced to assault a steep ridge across the creek bed. 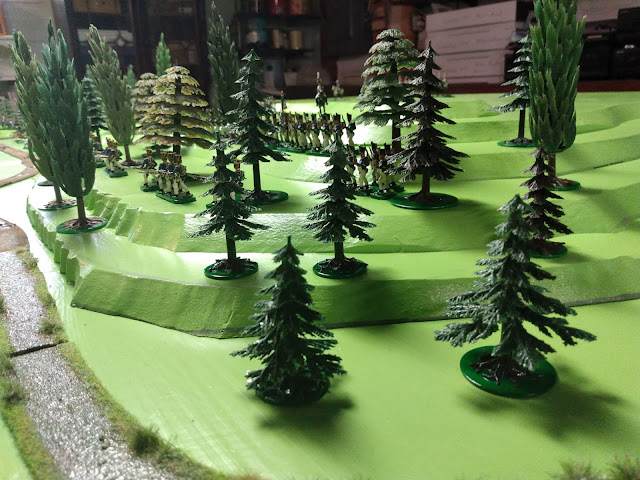 The way along the stream is currently unguarded... 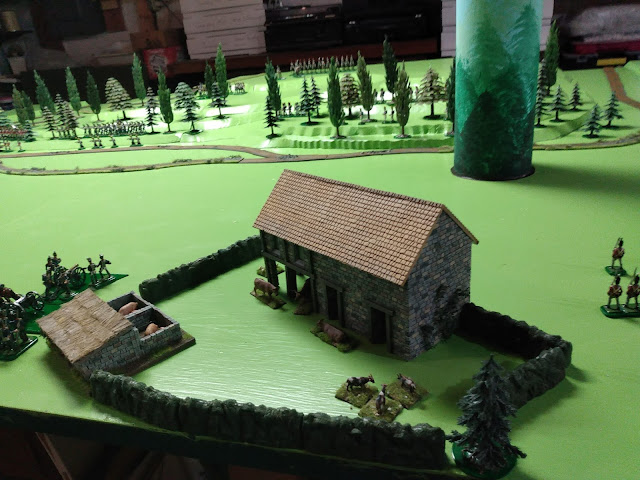 Here is a nice view of the village and the decorative pole in the middle of the battlefield that keeps our house from collapsing!  The buildings are plaster made with the Linka plaster casting system of moulds. 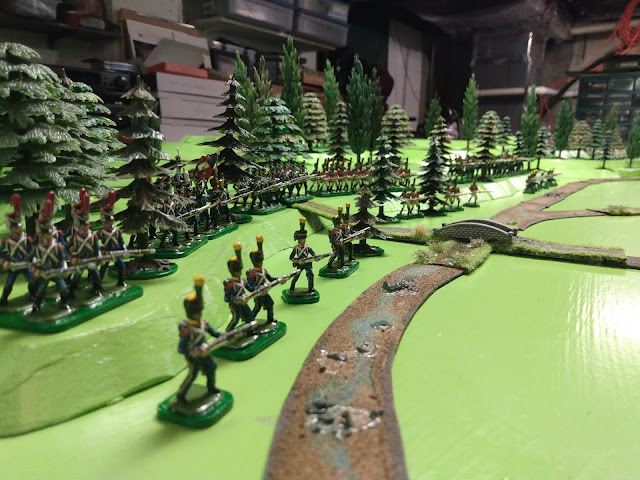 While the French right appears strongly held, approaching up the road will be 2 full battalions of British riflemen.  The battle at Rolica pre-dates the usual British practice of detaching companies of riflemen and distributing them amongst the brigades.  The Voltigeurs in front here may soon find themselves in dire straights! 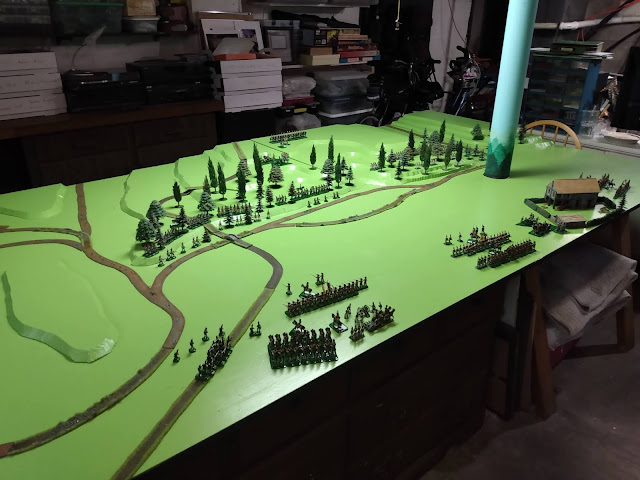 The overall field of battle.  This is just a preliminary set up and the distribution of troops is likely to change, but I wanted to see how everything fit on the battlefield.  I am very pleased in the way that the French line corresponds with the historical coverage of the ridge.  I think I at least got the scale right!
Posted by David at 4:33 PM 12 comments: