Vimeiro: An International Battle Done in the Old Style

Vimeiro: An International Battle Done in the Old Style

The Northern battle between the French brigades of Solignac and Brennier and massed brigades of the British and Portuguese under Wellington in 1808.

The battle was staged in the United States, with players hailing from Scotland, England and New Zealand.  Players received "bird's eye" photos from their commanders perspective and submitted orders via email.  Many thanks to Stryker, who provided his home grown set of old school rules called Muskets and Marshals, which were slightly modified to accommodate the bigger battalions of the Tennant/Crenshaw collection.  Typical battalions are composed of 24-36 figures, with skirmishers operating in detached groups of nine figures.

Units engaged are not accurately represented as I was restricted to those available in the collection at the time of the battle.  The numbers engaged are relatively equivalent however.

Units engaged are not accurately represented as I was restricted to those available in the collection at the time of the battle.   The numbers engaged are relatively equivalent however. 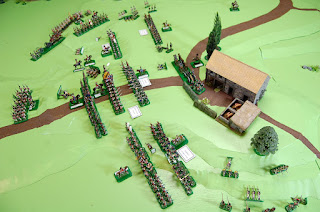 The battle progressed largely along historic lines, with aggressive British attacks chasing the French from the field.  That being said, the British paid for the victory with very heavy casualties (especially among the high command) and at the end of the game (Turn 14 - just prior to the French fleeing the field) the score was only 5-3 in favor of the British (each army received one victory point for each battalion in good order).  Thanks to Ian, Matthew, Rob and Aly for a great time that got me through two months of recovery from heart surgery.  You guys are the best!