One of the more intimidating tasks I have attempted in managing the Tennant collection, is matching Der Kriegspieler (DK) figures to a unit of their more refined Hinton Hunt brethren.  DK figures are in many cases a blatant pirated copy of the Hinton Hunt originals, but with the moulds for the Hinton Hunt figures gone (or in hiding) all we are sometimes left with are the DKs.  I have previously added a few DK command figures to British battalions, but as these are generally one of a kind poses, they are more easily hidden.  In the case of the 5th Battalion of the  60th Royal American Rifles, I had to resort to adding DK rank and file to bring the unit up to strength for the planned action at Rolica.  Mr Tennant provided a core of 12 kneeling and walking figures, to which I added three command figures and 9 standing firing figures. 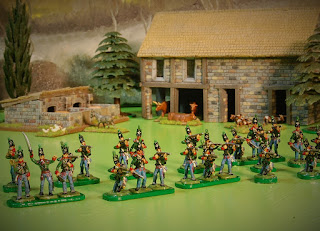 Here you can see the entire battalion and how it has come together.  All of the DK figures were painstakingly cleaned of their former paint, and meticulously filed and shaped to optimize the metal castings.  I was fortunate to have a number of extras which allowed me to choose those castings that had weathered time to the best effect. 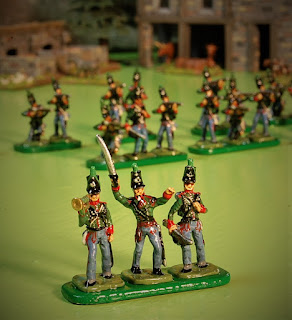 The command stand was the vignette I was least worried about since all of these are DK figures and would not be intermingled with the Hinton Hunt originals.  The Major leading the battalion required some creative painting, as he was really intended to command a light infantry battalion, not a rifles battalion.  I was a bit unsure of the collar flap and how to handle the lace, but I have made what I hope is a reasonable guess.  Seeing these pictures in detail revealed that I had forgotten several of the metallic elements which I will have to go back and correct.  In his case I forgot to paint the hilt of his sword! 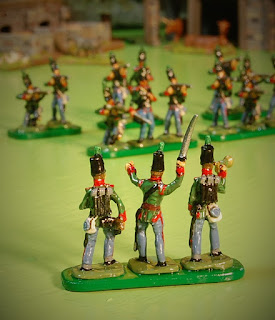 Yet another sin revealed as I realized I had forgotten the hunting horn badge on the back of the backpacks. 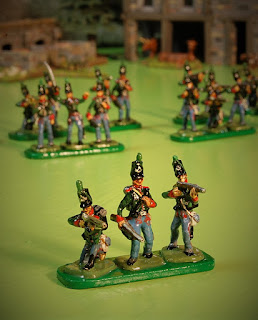 Here you get to the meat of the issue as I am mixing the two figure ranges as well as trying to match the masterful painting of Dick Tennant on the original Hinton Hunt figures.  The kneeling figure and the walking figure are Hintons, and the standing firing figure a Der Kriegspieler figure, no doubt copied from a Hinton Hunt original.  The DKs tend to be just a tiny hair smaller, no doubt due to using a production figure from Hinton Hunt as the master.  The painting and color, while not a precise match, is virtually indistinguishable when seen in mass and without magnification. 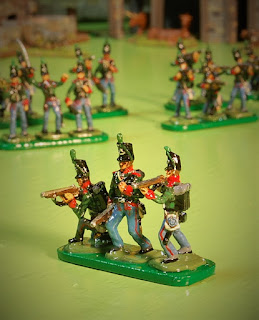 I rarely record the colors I use when painting figures, in large part because I tend to mix colors a fair amount.  While I came close to the original green used by Mr. Tennant, it is not too hard to distinguish a subtle shift in color.  I do not find this slight inconsistency problematic in the slightest, but rather embrace it as a bit of variety within the unit (at least that is my story and I am sticking to it.) 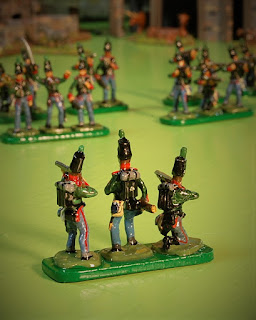 The red on the collars and cuffs looks like a tight match at least! 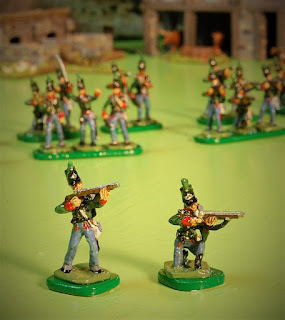 Matching is less of an issue when the figures are based in singles.  I do like the variety of poses in a skirmishing unit like the rifles. 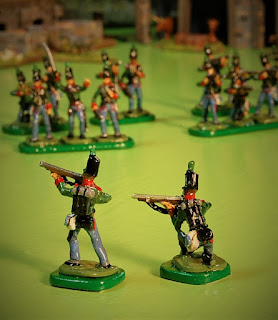 Another missing hunting horn badge on the backpack.  Ugh! 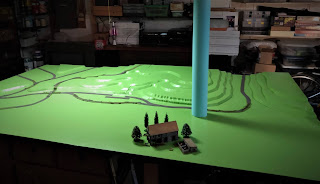 In the meantime the battle board for Rolica has progressed nicely and is drying while I paint the remaining units. 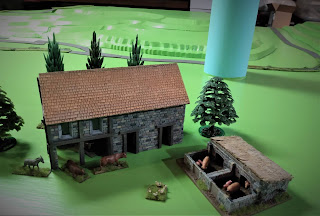 These farm buildings will represent the village of  Columbeira just outside of Rolica.  The buildings are made from plaster, cast in ancient HO scale Linka system moulds.  The animals are from a nice Pegasso plastics set.
Posted by David at 7:15 PM 12 comments:

What better way to spend the Fourth of July than in the basement working on a game board.  All of the Independence day fireworks have been cancelled due to the pandemic, so the basement seemed like a good option for the afternoon at least. 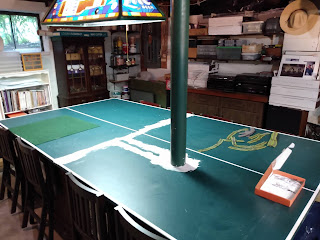 Last weekend I patched the hole I had to cut in the table to accommodate the basement's structural support pillar.  I little filler and some spackle made quick work of this task.  That and a light sanding made it ready for painting. 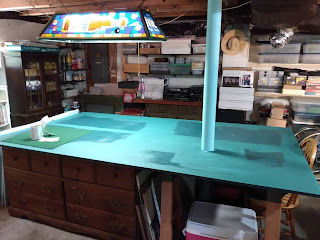 Before painting I wanted to cover all of the spackle and white boundary lines of the ping pong table with a relatively uniform shade of green as a primer.  I also painted the support pillar a sky blue and intend to conscript my daughter to paint some pine trees around the lower portion where it emerges from the table.  It will be a really dense impassable forest!

While that was drying a rabbit was outside eating all of my vegetables, so after a culinary decimation of the rodent kind, I wanted to tidy up the garden and put some poultry netting around it.  All of that is just to say I do actually have other chores around the house and it's not all fun a games.  If I could only figure out a way to still make an income and not have to work.... 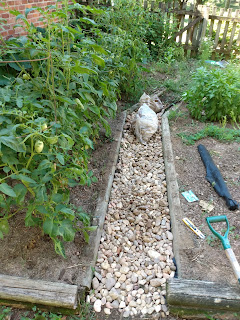 July the Fourth morning was spent in the Garden before the heat of the day hit.  Not quite finished! 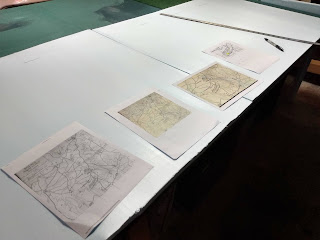 With my chores done it was time to turn my attention to the game board.  Here I have several contour maps of the Rolica battlefield that I used to guide the cutting of the hillside. 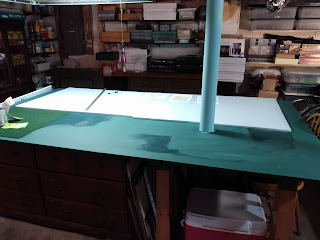 The first layer of 1/2 inch insulation foam board, ready for cutting.  Each subsequent layer represents a 25 foot gain in elevation. 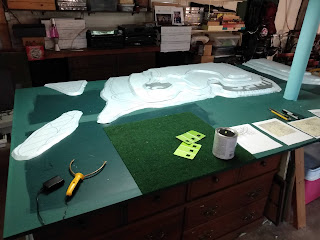 The contour lines of the hills assembled.  Thank goodness for the hot wire foam cutter I found on clearance several years back at the local art store! 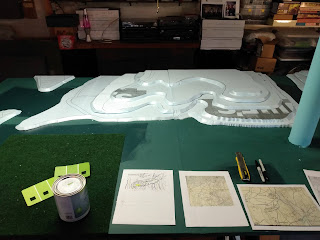 In this shot you can more clearly see the "cuts" into the hillside that the British used to try and advance up the hill.  Lots more work still to do but this is a huge step forward!