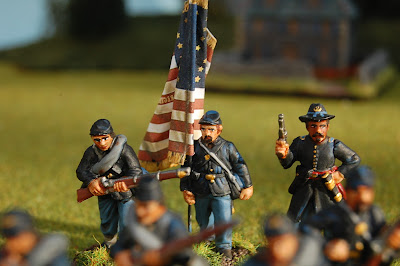 I decided to get my desk cleared off and so have been taking care of some older projects before continuing with the Renaissance Venetians. First up are some Perry 25mm plastic Union Infantry. I was a bit disappointed at first with these, as they are a bit chunkier than I have come to expect from the Perrys, and the detail is not as crisp as I would like. With that said however, I thought they painted up quite well and more importantly, the final product has made me excited to try some more. Now I just need to find a good set of skirmish rules.... 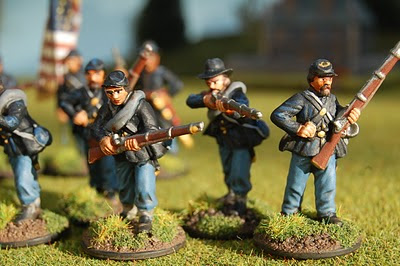 To facilitate a more uniform look for the federal troops I only chose figures with the sack coat (at least I think that is what these are called). This was my first foray into the ACW period so I was on a steep learning curve to try and get the uniforms correct. I did some custom cutting as well to maximize the number of troops I could get from the box in a firing line position, converting marching pose to holding a rifle horizontally like the figure above. The officer in the back is holding a pistol from the cavalry set. 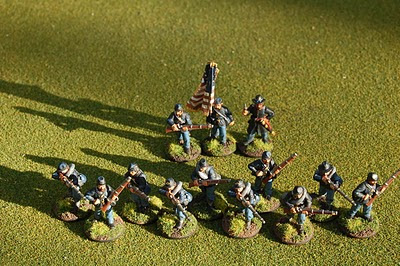 A birds eye view of my first Federal company. I have another on the way with shouldered arms, but they will have to wait for the completion of the Venetians - unless I get impatient! 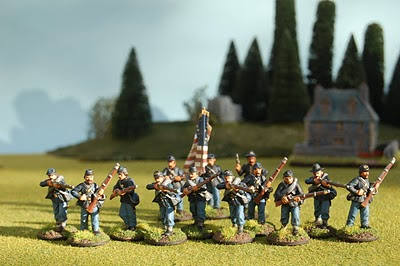 The firing line from Johnny Rebs point of view. 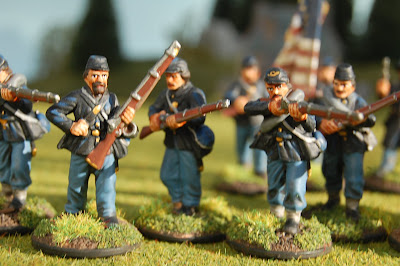 Next up the American War of Independence in 54mm. 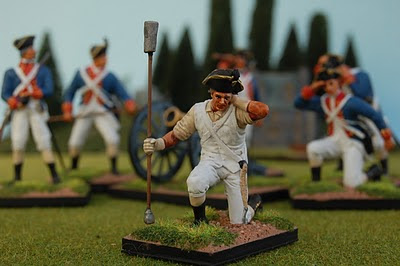 I got sucked into the 54mm scale by a demo game at Nashcon by All the King's Men. Though I would like to have purchased their artillery, I ran out of funds, but found this Imex plastic set on sale at my local hobby shop for $8. They were marketed as Americans, but as the uniform was the same for both countries, I simply painted them as British. Above you can see a gunner stripped to his waist coat in the heat of working the guns. I replaced the plastic rammer with a metal rod which I inserted into the sponge and rammer of the plastic original. 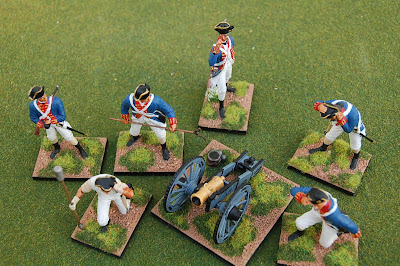 Fortunately the Imex set came with the same proportion of 6 crew to one gun that is used in the All the King's Men rule set. 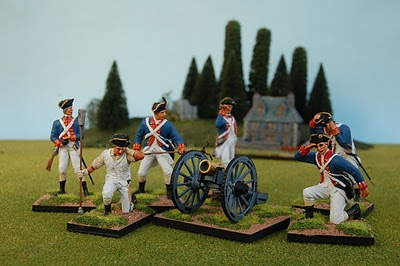 I thought the sculpts of the plastic figures was actually superior to the metal ones, though mold lines in this Imex set were not well placed, hence many a crewman with a mold line down the middle of his face. I have found plastic mold lines very difficult to shave or file well. 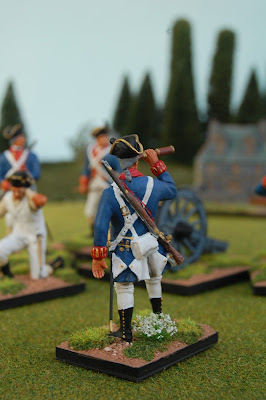 The commander. I did some work on the gun with green stuff to make it look more like a Brown Bess musket. It was originally sculpted with a long barrel without a supporting stock, which looked more like a long cavalry carbine. Maybe the sculptor knew AWI weapons better than I, but I could find nothing for the period that looked like it, so I changed it. 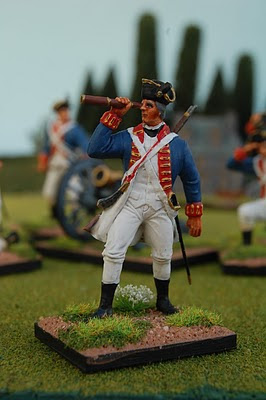 Here he is in all of his distinguished commanderly glory. The scabard of his sword was replaced with flattened floral wire which ended up working quite well.
Posted by David at 6:11 PM 3 comments: 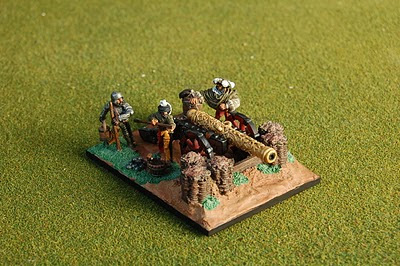 Just finished basing the artillery element for a DBA - RRR or DBA - Hx Venetian army. The Culverin and accessories are by TAG, the crew are customized Ral Partha, and the Gabions were provided by Barry Scarlett of Murray Terrain. 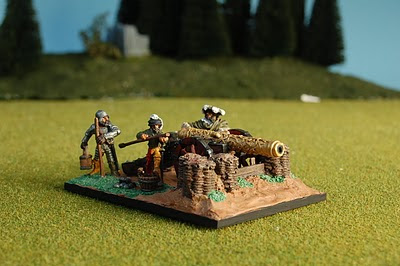 This element is an odd assortment of scales, but they all seem to work with each other. The Ral Partha figures are true 25mm figures. The barrel of the canon is 50mm long which scales to about 11-12 feet in length, making it a large culverin, but by no means the largest that were used in the Renaissance period. The gun is designed for use with 28mm figures, but as artillery in this period was so variable it works quite well. The gabions are really meant for 15 - 20mm figures, but in comparison to the Ral Partha figures they end up scaling out to about 3 feet high, which though not as large as some, seems a reasonable height for gabions on top of a sloping earthwork.
Posted by David at 2:19 PM 1 comment:

Thanks To The Assault Group! 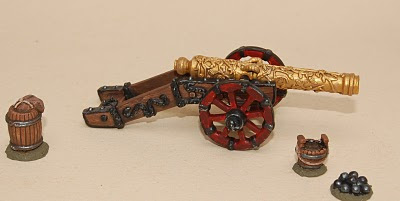 The Assault Group was nice enough to let me have this marvelous Ottoman Renaissance canon in exchange for a painted sample. This is a truly marvelous piece and I can't wait to show you all the final element. The crew are almost done and I will be mounting it behind some gabions and earthworks, so it should make for an eye catching element.

Thanks again to Pete and the folks at TAG!
Posted by David at 9:25 AM 1 comment: