My good buddy Rob recently shared his stunning brushwork for the Spanish Regimiento de Dragones de Almansa with a few of our fellow painter/collectors.  Yellow coated Spanish Dragoons really are a must for any Peninsular army, so I asked if I could share his work on my blog.  Rob did an extraordinary amount of customization and prep work on these.  In his own words:

"I’m not sure but I believe they were okay, but not great, copies of [sic Hinton Hunt] BN/206 (the muskets were crap which was why I definitely wanted to replace them).  The horses all had ‘swallow-tailed’, light cavalry, shabraques but no idea of the code for them – the exception is the officer’s horse which was, I believe, a genuine HH French officers horse, again don’t know which one.  Pistol holsters are solder with holes drilled for steel wire pistols the butts being topped off with some ‘5SecondFIX’.  The trooper horses had the shabraque tails cut/filed off and the edge restored with some Green-Stuff – their rolled cloaks were filed down to better fit the riders as I didn’t think about the fit when adding the longer coat-tails to the riders and was not going to re-do those again!

All the figures had lost their swords so I added new white metal ones.  I have some old white metal spears in my bits box and these are squashed with plyers to get a flat section which is cut and filed to shape (an easy job).  The hand is then drilled and the sword inserted and glued – too frail to put a soldering iron anywhere near it.

The musician has his right hand cut off and his sleeve drilled out then a new hand and trumpet added from Newline – the arm being filed to be thin enough to be inserted up the ‘sleeve’.   The trumpet banner is just aluminium foil super glued on.

The coat-tails are solder with, for the rank and file a final finishing off using Milliput as it’s easier to get them looking similar that way than just using solder.

The command figures had their plumes extended with solder and filed to shape – the pictures I have show the plumes long or short so went for showier plumes for the command figures.  I also gave them gauntlets – the rank and file having bare hands as they want to use muskets on foot – this was also the reason for filing the boot tops down and using a bit of green-stuff to build them back up as gaiters.

Finally, which delayed things a bit, the manky horse bases (very irregular in shape) were built up with some Milliput to look more like HH bases.

The muskets were from that very helpful chap, Sean, at Newline, God’s gift to 20mil convertors.  The cross belts for the cartridge box (that was added with solder and filed to shape) and musket are Green-Stuff and added after the muskets were glued on (Super Glue).  I filed a bit of a groove in the backs of the figures for a good join for the musket and so it wouldn’t have to curve to follow the figure’s back." 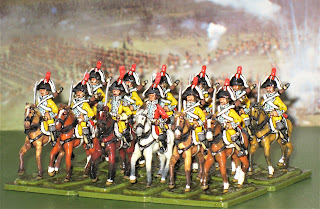 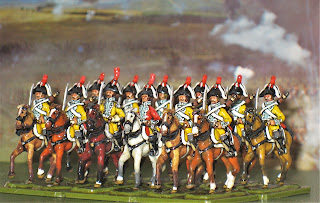 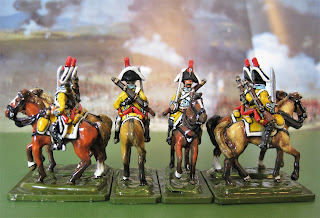 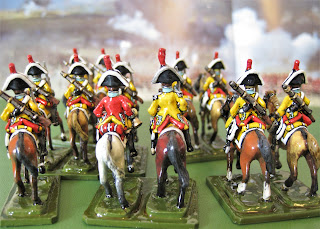 Now that Rob has completely showed up any of my previous efforts, I thought I would at least post a few odds and ends of things to come in 2023:

Well that is quite enough to keep me busy for awhile.  With any luck I'll have them done by the end of Summer.  Till my next post, hope you all have a remarkable and joyous 2023!

For quite some time I have wondered what base model Dick Tennant used as Portuguese Dragoons and Mounted Royal Horse Artillerists.  It seems so very obvious now, but not knowing the figure line as some it just took me a looooong time to put the pieces together.  I have two planned conversions in the works to make two Colonels for the remaining Portuguese Dragoon regiments, so I needed to find the right figure.

Below are Dick's Portuguese Dragoon conversions.


The Mounted gunners were a similar mystery, but I soon realized with the exception of the officer, they were derived from the same figure.


The end result of all of this is that I finally realized both the Portuguese Dragoons and the mounted artillerists must have been derived from the same figure.  And the winner is: BN 28 mounted on a cavalry horse (Anyone know which one?  DT ground the bottom of his bases flat for a good glue surface, so the codes on the bottom of the bases are usually missing).  You can see a picture of the figure here:
http://findthatfigure.blogspot.com/search?q=BN+28 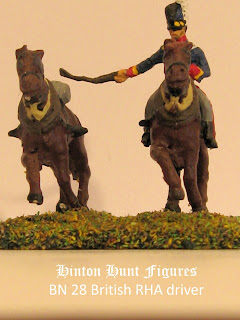 In other projects on the workbench, I have been preparing an addition to my Late-Medeival/Renaissance army for DBA/ADLG.  Unfortunately I have just learned that I have another commitment the weekend of the ADLG tournament, so I am afraid these poor fellows may not make it to the table for some time.

Here's the rest of the army awaiting their compatriots: 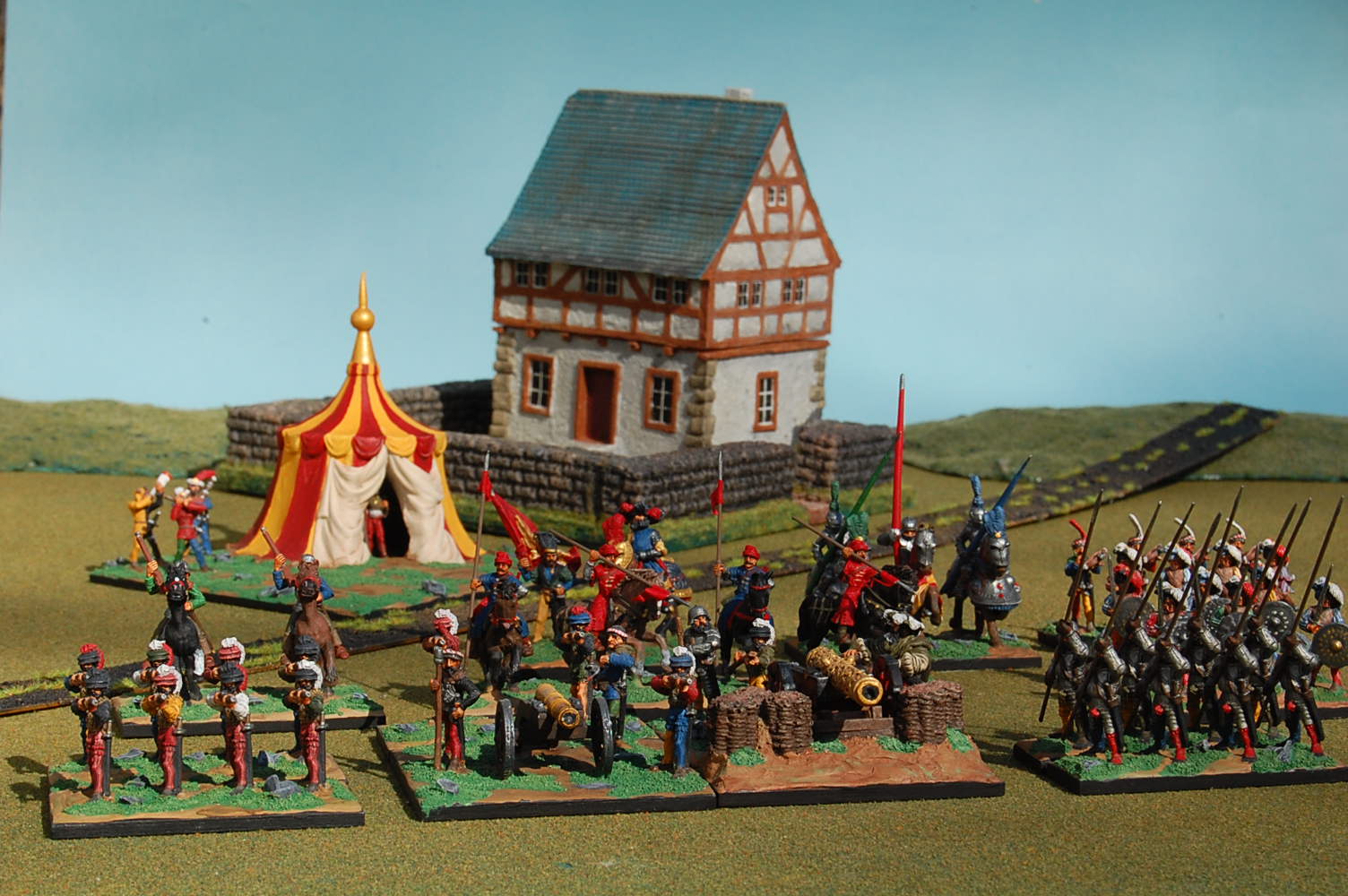 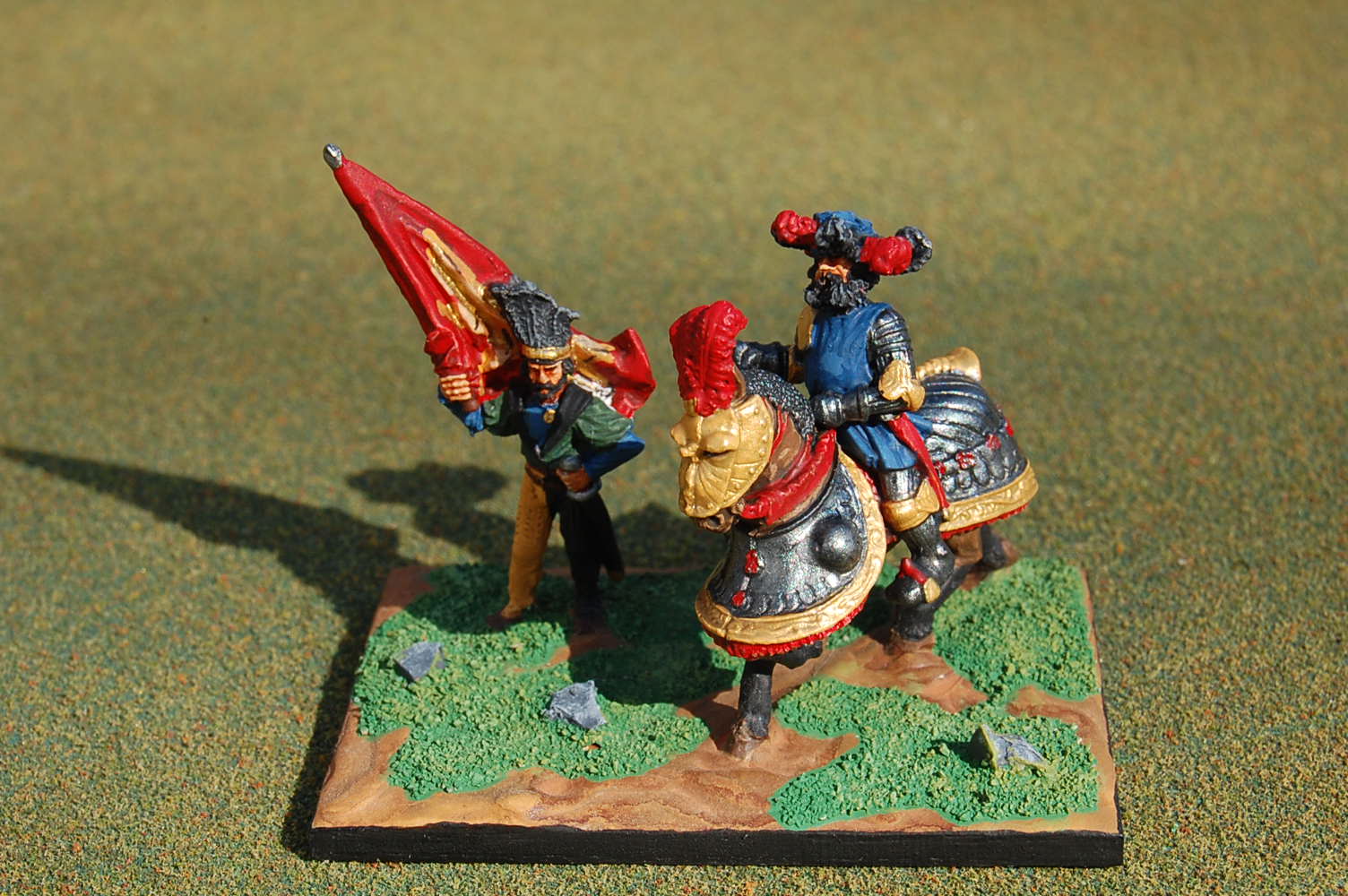 After much perturbation, I have finally gotten up the nerve to finish the 7e Chevau-Leger Vistula Uhlans.  This has always been a favorite uniform of mine, and the core of this regiment was so ably painted by Dick Tennant, that I was a bit intimidated by the idea of expanding it and bringing it up to full strength.  Most cavalry regiments in the collection consist of 18 troopers and a commander, but DT only painted 14 of these.  Probably like me, he had trouble getting the figures to do a full strength unit! I had despaired of ever finding some Hinton Hunt dismountable lancers (rare as hen's teeth I believe Wellington Man called them).  Eventually I located some, but they turned out in the end to be rather poorly cast copies.  Not to be deterred, I cleaned them up and decided to give painting them a whirl.

These Uhlans were featured in the Airfix Guide to Napoleonic Wargaming by Bruce Quarrie.  When I received this collection a few years back, he was kind enough to send me some color copies of the original photos which you can see below.  This was absolutely one of those photos that hooked me on the idea of starting my own Napoleonics collection!

The Bavarians needed a little skirmish support now that they have artillery, infantry and cavalry, so to the rescue comes the Bavarian 5th light Infantry.  Knotel has a fabulous illustration of the 5th, which went a long way to helping me prioritize this unit, not to mention the small number of figures required!  The figures are primarily Der Kriegspieler, (2xDK 175, 5xDK 174 with plume added), though the officer is Hinton Hunt (BVN 6) and the trumpeter a converted Hinton Hunt/Dave Clayton figure from BVN 7?. 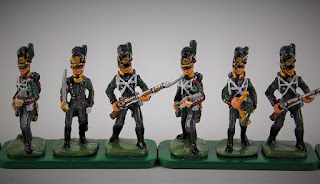 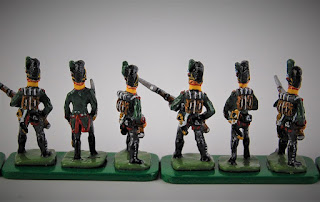 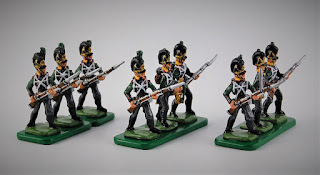 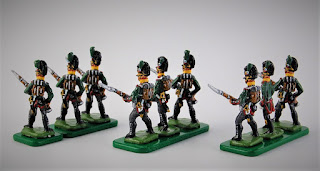 Recently I was able to host a game to celebrate my birthday.  The game was an excuse to ply good friends with food and wine, and also to get all of my toys on the battlefield.  The British may a good effort to hold their own, but in truth the deck was a bit stacked against them and the French were able to gain the advantage on both flanks, rendering the center untenable.  Some nice pictures of the game can be found here thanks to David R. and his excellent camera work: 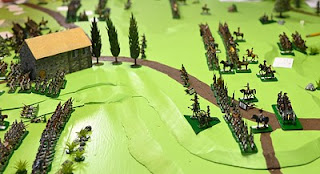 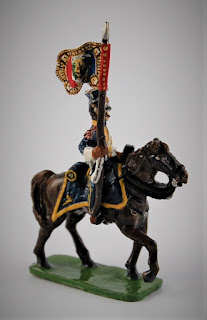 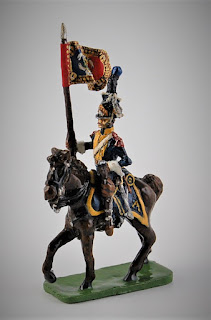