Xmas Fun and the The Perils of Collecting!

As is my usual habit, much to the amusement of my family, there were a couple of presents under the tree from me, to me.  I knew I was taking a chance, but am having to learn the hard way about buyer beware.  I'm sure there was no intentional misrepresentation on the seller's part, but sometimes what you get can be a bit, well, surprising.  My first present to myself was a unit of Bavarians that I suspected to be Hinton Hunt.  There are a couple of Austrian Grenadier officers masquerading as Bavarians, but enough line figures to accommodate a simple head swap, so no problem I thought.  The problem turned out to be the muskets, which appear to be childishly executed, so I suspect these are either recasts with added muskets or conversions of some sort.  Does anyone know a good source for 1/72 scale muskets?  They really will have to be replaced to be use-able, otherwise the figures are quite nice. 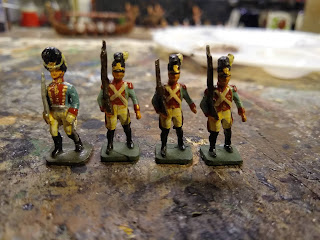 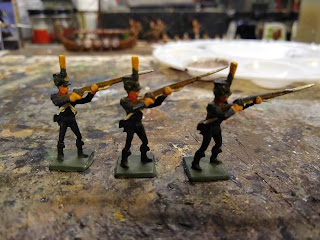 This next unit was advertised as 1/72 by the eBay seller and I was curious as to their provenance, but really didn't know what they might be.  Upon inspection of the bases, they turned out to be Hinchliffe miniatures without a doubt, but earlier smaller sculpts apparently done by Peter Gilder himself in the early 70s if the web is to be believed.  While smaller than the later Hinchliffes, the style is similar, but much more slender.  Indeed I thought these might be GHQ miniatures, but once I got them it was clear they are much taller - closer to 30mm. 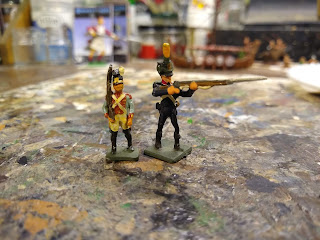 A couple of months ago while trolling around on eBay I also found some GHQ miniatures.  I would like to do a unit of these but would need to arrange a trade with someone else who has a few, as two boxes of the same type would be needed (though one box could be elites of that type.)  I have a box of 1808-12 marching French Fusiliers, and probably marching French Legere from the same period, but the plume is at the side of the shako instead of in front, so I thought perhaps they could be Swiss, as I have seen that plume arrangements in some illustrated plates - does anyone know if the French did a similar plume arrangement on occasion? 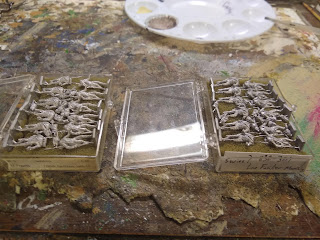 And now for Something completely Different

And now from collecting perils to a little bit of goofy fun.  I finished the dungeon room for an evening of The Fantasy Trip and Death Test with good friends.  It has been thirty-five or more years since I ran a role-playing game and it showed.  We were all essentially new to the game, so we only made it through a couple of rooms before the party met its demise, but that was largely my fault for a mis-read that gave the monsters twice as many attacks as they should have had.  Oh well, dinner was eaten, alcohol consumed and fun was had with good friends, so no matter.  Here are a few pictures of the dungeon - a combination of plaster floor tiles and blue insulation foam that was etched and painted.  The miniatures are 40mm Mindstalker miniatures for the most part, with a few VV miniatures and some LotR plastic combat hex pre-painted figure for expediencies sake. 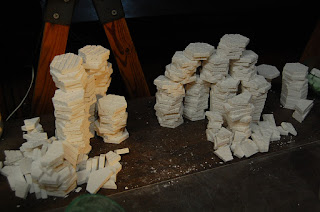 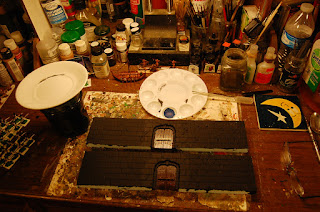 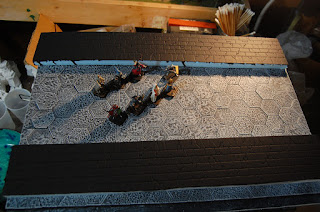 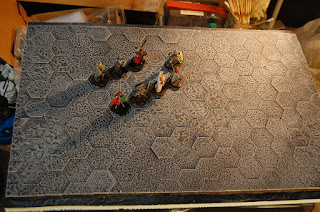 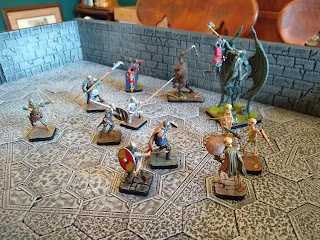 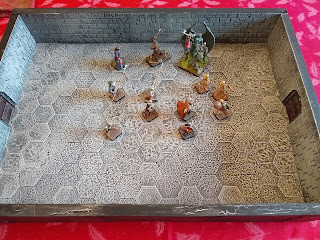 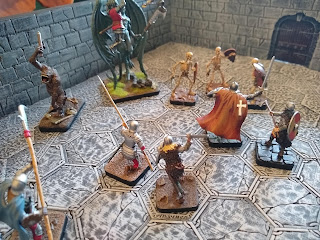 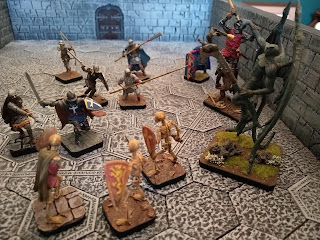 Alberken Staff Set and Shake up in Command

I recently saw this Alberken staff set on eBay going for a reasonable price so I picked them up, mostly out of curiosity, because I knew I could only use the French staff set.  I believe we have Napoleon, Murat, Ney and Eugene.  For the British it appears to be Old Nosey himself, with Picton, Uxbridge and Hill.  I don't really have a use for the British staff set, so let me know if you could use them.  Also included were these odd SAE figures, which will get melted down unless someone tells me otherwise.  There is a certain simplistic charm in these old figures, but some of the paint is chipped, so I am debating whether to try and touch them up, or just start over again. 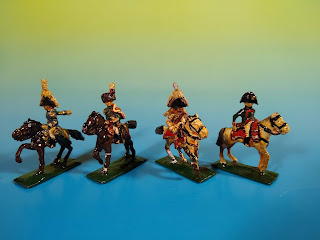 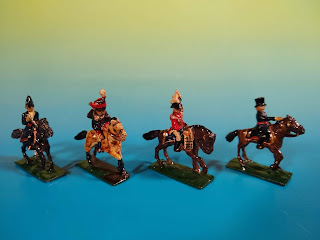 Not to long ago I received a splendid lot of Hinton recasts from J.C., and he included the figure of Murat as a freebie.  Was a fun surprise to realize I had both a vintage painted figure and a pristine unpainted figure as well. 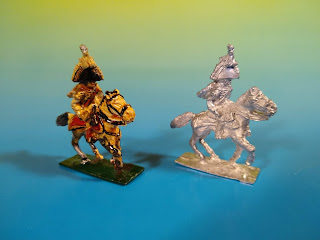 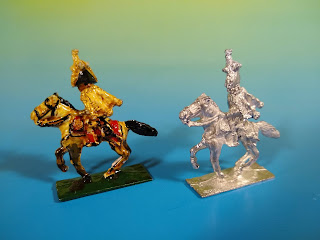 Also included in this lot were these Union of South Africa figures. 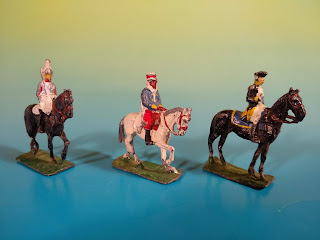 These were made by the Swedish African Engineering Company I believe (SAE), which I assume are not of any real value, but let me know if anyone wants them.  The paint is in rough shape.

Now on to my biggest conundrum.  I really need to be more thoughtful about my figure choices, and what I thought would be a good figure for representing Major Vrigny of the Fusilier Chasseurs, turned out to be a Colonel of the Garde Chasseurs, Baron Charles-Andre Meda.  It was only after painting his jacket French Blue, that I realized he had a cavalry saddle and cavalry trousers.  I'll paint him up appropriately, but now am at a loss for Major Vrigny. 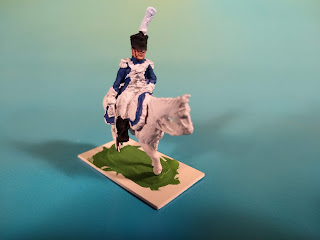 Here is a portrait of Major Vrigny of the Fusilier-Chasseurs.

What do you all think of the figure below for his representation?  Is this a reasonable figure if I loose the mustache but keep the mutton chops?  Should I leave him in the bicorne, or do a head swap and put him in a shako like his troops? 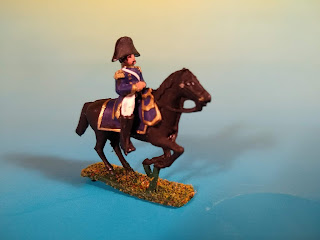 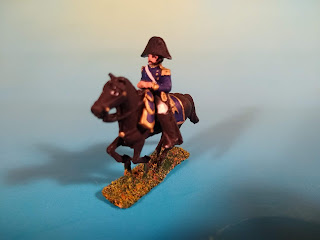 Speaking of, here are the fusilier Chasseurs - coming along, but slowly. 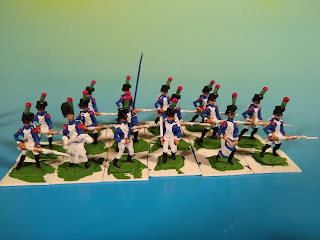 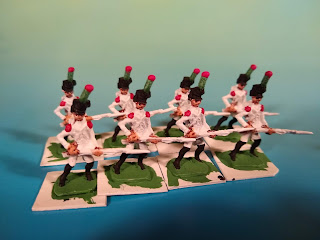 For some time I have been debating how to paint a battalion of DK-16s, and have finally arrived at my decision and the painting has begun.  The sculpting on the DK16s is appropriate for the Fusilier-Chasseurs, with epaulets and gaiters as well as the obligatory plume.  For command I have a selection from the French command pack, as well as an authorized recast of a sappeur by Jon Cunnigham.  Unfortunately, due to an earlier error on my part, the poor gentleman has been through two head transplants, and finally found himself with the head of my one and only spare Dutch Grenadier.  I have also discovered, thanks to the inspiration and excellent work of Wellington Man on his battalion of young guard Voltigeurs, that the flags of the young and middle guard did not bear an eagle.

Only the Grenadier regiments were given that honor, so I replaced the cast on flag with a plain spear as the pole, and will add a paper flag as the final step.  No fizzy can flags for me - I will leave that to the experts! 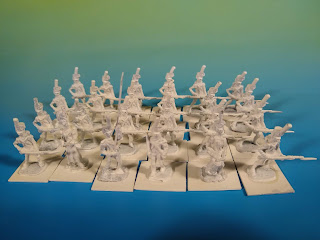 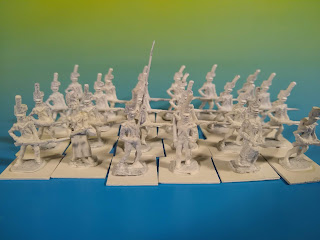 The commander of the Fusilier-Chasseurs during the 1812 campaign was Major Pierre-Francois Vrigny, who died in January of 1813.  I have decided to represent him with a modern figure by Art-Miniaturen.  It is a lovely sculpt and seems appropriate for a commander in the Imperial Garde. 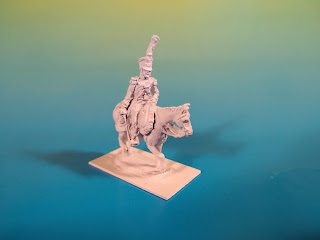 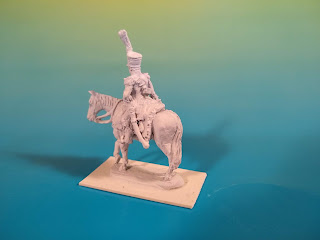 In addition to the Fusilier-Chasseurs, I was fortunate enough, thanks to WM, to be part of an auction that included 16 original Hinton Hunt elite Voltigeur firing.  I can't begin to express my thanks for the chance to get these exquisite figures.  I am torn as to whether I want to hold on to them until such a time as I can find a few more to finish the battalion, or to mix them with some very nice elite Voltigeur charging DK figures.  While the DKs are quite nice, next to the Hinton Hunts they are petite.  I will say the idea of mixing poses for Voltigeurs has some appeal, and I am considering flanking a DK figure with two firing Hinton Hunts on each stand of three, perhaps with the addition of added height to the base to minimize the size difference.  I would love to hear from folks with opinions on the matter. 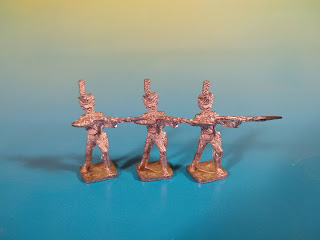 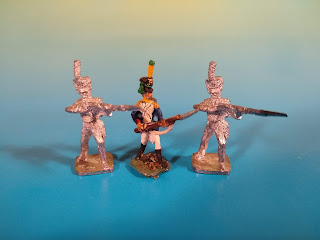 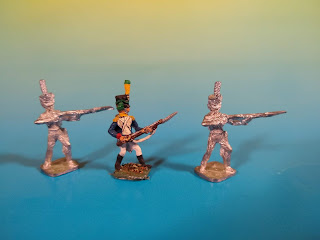 Thanks for stopping by my blog and hope you enjoyed.  Look forward to your comments as the project progresses.
Posted by David at 8:54 AM 7 comments: