The British are Coming! 150 years of the British Army in One Post!

At long last the British are progressing toward the end goal of recreating the battle of Rolica from the Peninsula War in 1808.  This was one of the few battles in which the British outnumbered the French during the Napoleonic Wars.  The French, however, were well situated on a steep hillside, protected by steep gullies on either side and a road to their rear for a retreat if needed.  The British sent out flanking forces to cut this line of retreat and advanced up the steep slope...

First up is the 71st Highland Light Infantry.  These hardy fellows survived their journey across the Atlantic very well, greatly simplifying my job in terms of getting them ready for the wargames table.  A little shading and highlighting was all that was required.  Thank goodness for Mr. Tennant who was the original painter and took on the distinctive highland checkerboard pattern around the bottom of the shako. 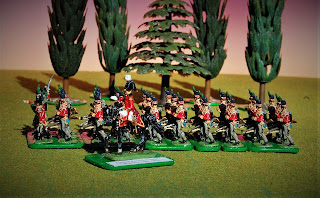 They are ably led by Colonel Francis Dundas, who urges them forward. 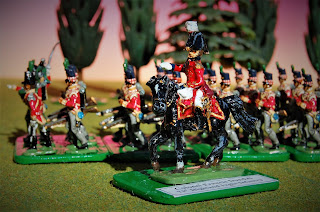 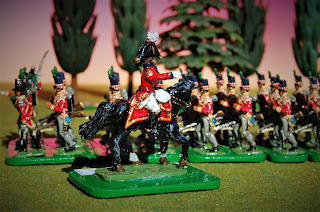 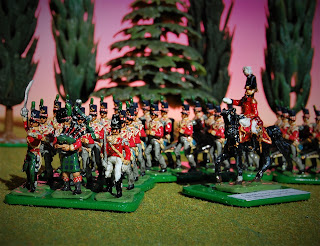 No Highland regiment would be complete without a piper!  If anyone has a highland drummer and two ensigns with standards I could get these gents ready for the parade ground - hint, hint... 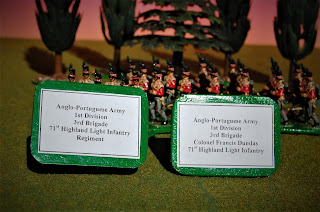 I don't think I have ever posted a picture of the bottom of the stands, but all units are identified on the bottom to aid in keeping them together, and to remind me what they are! 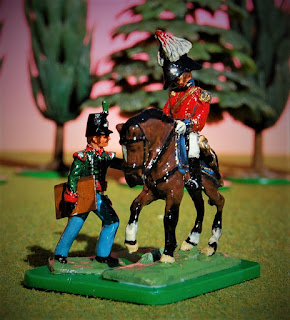 This is a delightful little vignette that Dick Tennant put together of a Brigadier and an officer from the 60th American rifles.  The horse was a little worse for wear after his journey and was a bit wobbly legged and off kilter, but easy enough to straighten out and stand upright again.  Just a little shading and a few highlights to bring out the richness of the colors was all that was needed for the humans. 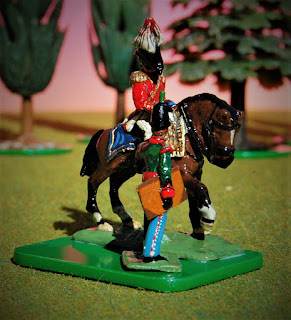 The basing on these still needs its final coat of varnish, but I thought they were close enough to being done to stand for their picture. 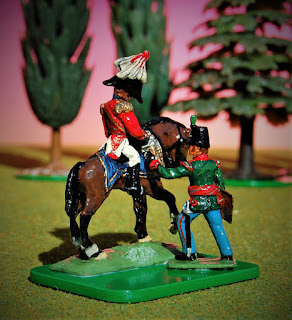 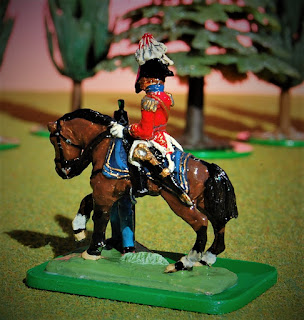 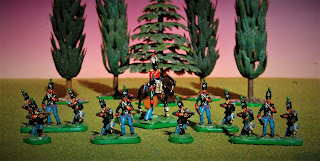 The 60th emerges from the woods...

and then remembers they are skirmishers and ducks back under the trees for cover. 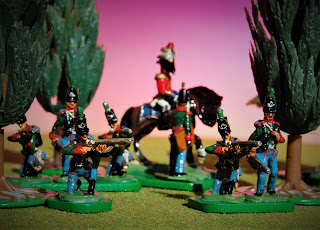 The two poses were clearly painted at different times and I had to do a bit of detail work to get them consistent, but I am very pleased with the end result. 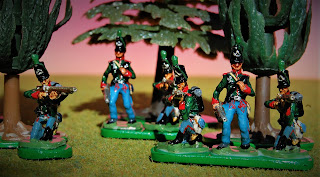 The lace on the trousers is all Dick Tennant's work.  Really an amazing hand for detail he has.

And now much much later...

Fast forwarding 150 years, another famous British army, the 8th, claimed fame in the desserts of North Africa combating Germany's vaunted Afrika Corps under the Leadership of Erwin Rommel.  I came upon this diversion from my normal Napoleonic modeling when a colleague brought an ancient Airfix model of a Grant/Lee tank to one of our monthly game days.  I remembered trying to build this kit as a youth and the frustration it evoked.  I decided to try it again as an adult, and must say the frustration was still there.  This was not one of Airfix Model's better efforts; parts were malformed and/or ill-fitting, but epoxy putty can cover a myriad of sins. 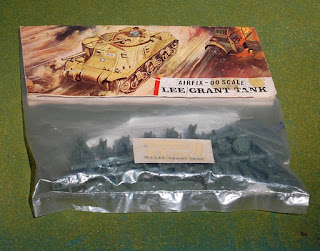 Does anyone else remember when they came in bags instead of boxes? 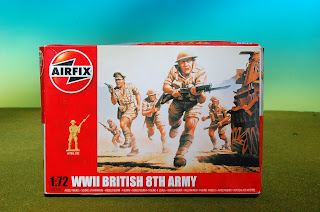 I couldn't model the Grant without some infantry support, so I attempted to paint some of the Airfix soft plastic figures from the same era.  I can't say this was fun, as removing the flash from these soft plastic figures is a chore, and I must admit I was not particularly good at it.  The final result was more than passable though.

Enough stage setting.  Without further ado, I present the M3 Grant and an infantry squad. 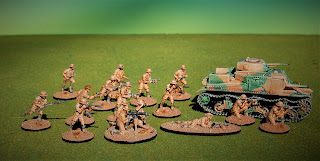 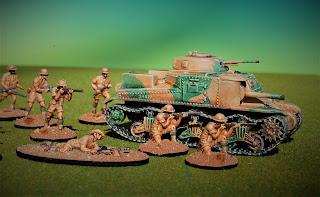 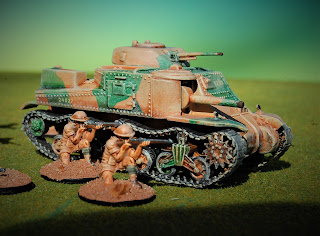 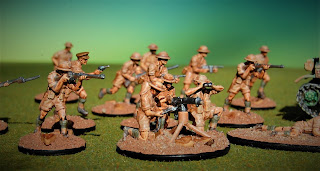 The soft plastic of the infantry was primed with a fusion primer especially formulated to bond with plastics.  Once painted they were sealed with acrylic washes, and a spray of Dullcote.  Flexible parts such as rifles, bayonets and ankles were then coated with white glue.  When dry, one final spray of Dullcote was added. 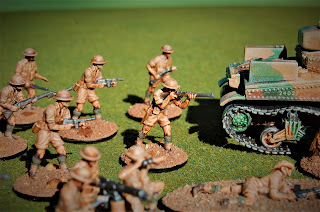 The infantry are all mounted on metal washers that are then painted and dredged through some sand for texture.

I'm not entirely convinced that the tracks of an M3 were loose enough that they would have sagged between the rollers, but the provided rubber tracks of the model were far too long and this was how I was able to get them snug up against the driver wheels. 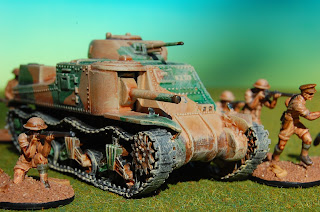