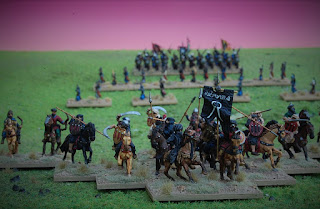 This is the various light horse elements for an Islamic Berber army in Spain, with added elements to make it more appropriate for an Islamic army during the crusades in the Middle East. 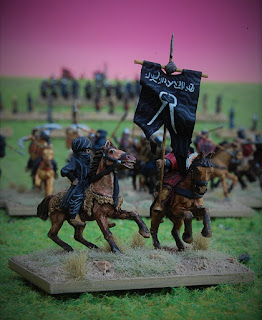 Ben Yusuf (of El Cid fame) as a light horse general.  The standard is taken directly from the movie, but I must extend my apologies for the Islamic script, as it is an approximation only and more likely resembles a kindergartner's scribbles than any actual phrases.  The figure for Ben Yusuf is actually an Ottoman Turk commander from the Condottieri range.  I added the veil and modified the robe a bit to look more appropriate for the earlier period. 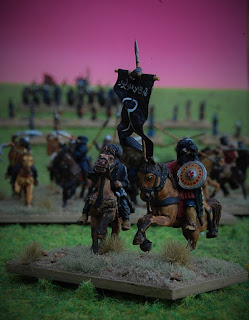 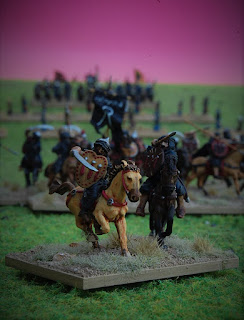 Here we have some Ral Partha Moors.  The sword has been re-positioned into more of a thrusting attack which makes the figure a bit more dynamic. 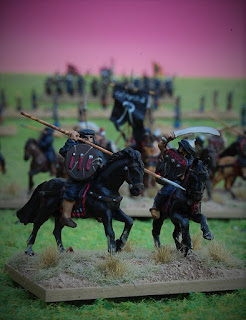 Another example with the sword in the original position.  The highlighting on the horse in the foreground is a bit heavy handed in this case.  I will admit to struggling with black, especially when there are no clear highlight and shadow areas such as this horse whose musculature is not well defined. 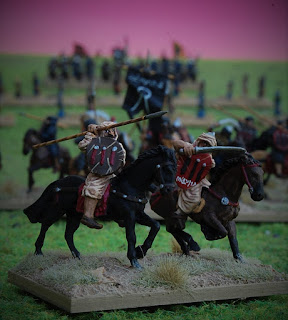 Here I have an element made more for the Syrian desert than North Africa and Spain.  The shields are still of Spanish design, but gone are the black/navy robes of the Berber tribe. 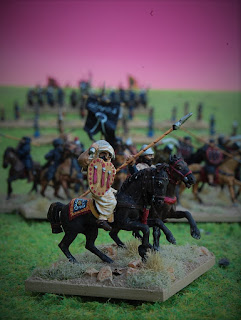 I had a blast with the horse blanket on this figure and was very pleased with the result. 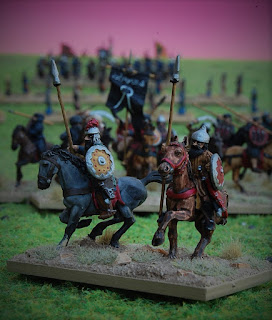 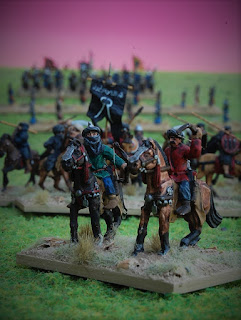 Turcoman and tribal light archers.  These are actually Persians that I have converted with head swaps or turbans and veils made out of green stuff.
Posted by David at 6:15 PM 4 comments: