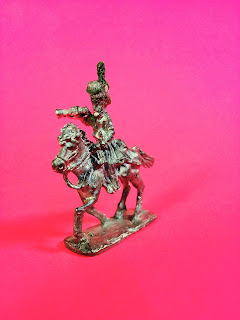 Since Der Kriegspielers did not offer any Cossack command, I set myself the task of modifying some figures to fit the bill.  Originally I thought I would just use Newline Designs figures, but the style just didn't seem to fit. 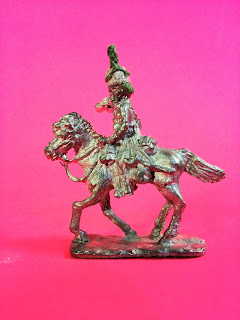 I did use their busbys though and replaced the tall headgear on one of the DK variants with the busby from the Newline Designs figures, since I did not have enough of the variant wearing the busby to create a full unit.  I also cut off trumpet and sword arms to replace the lance arm of the DK figures for the command.  Some cords for the busby and a plume made of green stuff got me pretty close to what I had envisioned.  The cords were pretty tough to manage, but the plume was just a textured lump of green stuff over a wire rod for support. 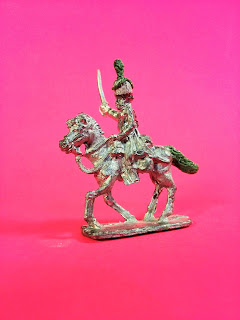 Some of the figures were in pretty rough shape, so here I have added some putty to the tail to keep it from snapping off. 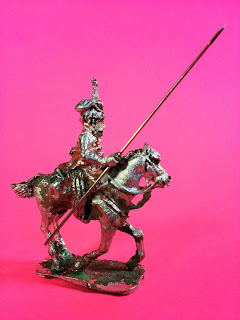 This poor guy just would not come clean, but enough old paint was removed that he will look brand new when primed.  Note the lance was removed and replaced with a strong wire lance and re-positioned.  The original lances were in such rough shape, I just didn't think they could be salvaged.  Not that I really mind, as I prefer the wire lance to the easily bent and overly thick lead ones.  The reins have also been repaired, as many of the figures had an incomplete casting, and the reins were left with a large gap in the middle of the free hanging loop. 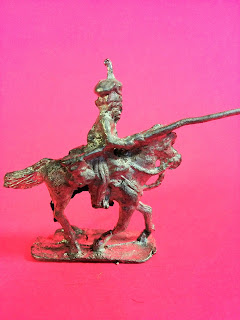 Here's the original figure with the lance in it's position resting on the head of the horse.  Makes it kind of tricky to remove without lopping off the horses ears, but it can be managed.