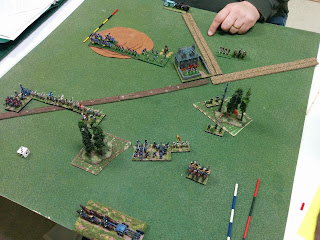 The crossroads of Brentwaldstadt were abandoned as two great armies approached to decide the fate of the once mighty Prussian state.  Frederick the Great was long gone and at the head of Prussia's armies was the elderly General Hohenlohe von Crenshaw.  While the Prussian army was larger, the out dated command structure and musket drills shackled the Prussian forces.  Nonetheless the Prussians moved aggressively into battle, seeking a delaying action on their right and a decisive clash on their left.  The main battle line on the left was supported by horse artillery and Colonel Von Blucher, leading his famed Red Hussars, while on the right, light infantry and jagers quickly occupied the woods opposite Brentwaldstadt with Von Beeren's heavy cavalry, the corp artillery, and a Saxon regiment in reserve. 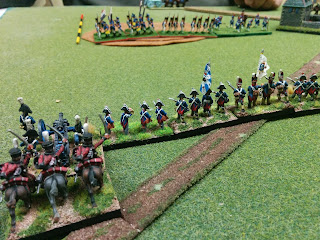 The view from the Prussian left as the main battle lines approach.  The French, with two regiments of elite grenadiers and supporting fusiliers have taken up a strong defensive position on the heights outside of Brentwaldstadt. 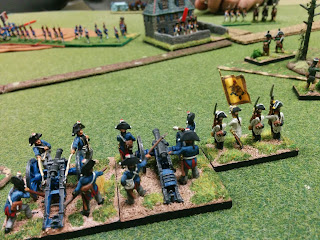 The Center - The Prussian and French corp artillery were engaged in fierce counter battery fire for most of the game, only occasionally being able to fire at more vulnerable infantry targets.  Note the Prussian jagers and light infantry moving into the wood to engage the French legere who have taken a defensive posture inside the walls of Brentwaldstadt. 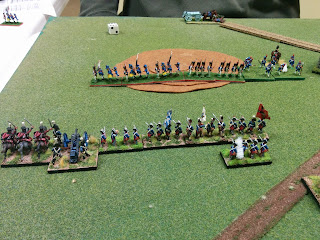 As the lines approach, one regiment of Prussian infantry, suffering heavily from the French guns, was forced to retire behind the main assault.  The horse artillery on the left has already chased one regiment of French Fusiliers from the field, forcing the French to either stand in their defensive position and take a withering fire, or advance on the Prussian lines. 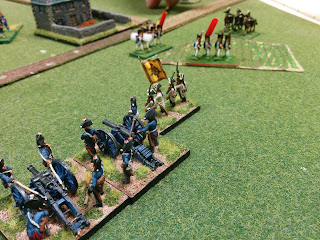 Dire situation on the Prussian right. 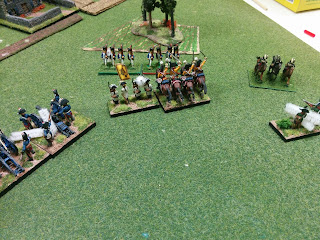 Von Beeren leads his cuirassiers forward accompanied by the untested Saxon allies, leaving the shaken Prussian jagers vulnerable to the curved sabers of the French hussars. 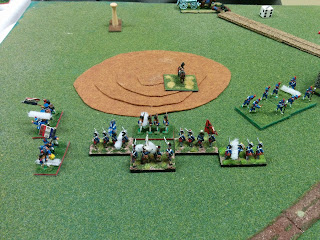 The French, unwilling to stand in the face of artillery fire, charge off the hill and engage the Prussians at close range.  In desperation the horse artillery is ordered to defend their position, and though they have initial success with the aid of the Red Hussars charging the flank of the French line, the French squares prove too much and deliver staggering volleys into the glorious Red Hussars, chasing them from the field.  The horse artillery though valiant to the end also succumb to the French charge, but a final crash of Prussian musketry shatters the French line leaving both side exhausted.  It is still very much an undecided contest, but both sides are at the breaking point. The French gather themselves and despite exhaustion and depleted ammunition stores, storm the Prussian left in a flank attack.  Undeterred the Prussians turn to face the attack, and despite being outnumbered 2 to 1, the Prussians hold, leaving the remaining French regiment and core artillery vulnerable to a counter attack. 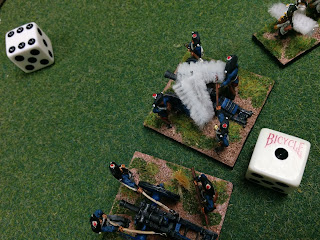 Everything is hanging in the balance.  The Prussians have held the French, but their counterattack will be a desperate gamble.  Just as the Prussians are gathering themselves for the final assault, a tremendous explosion rent the air around Brentwaldstadt.  A stray French shell landed in the caissons of the Prussian artillery, with the resultant explosion heard all the way down the road in Auerstadt, ten kilometers away.  Prussian Gunners and horses are ripped apart in a grisly scene from some hellish nightmare.  What is left of the artillery abandons their position, and the Prussian General Hohenlohe von Crenshaw, seeing his artillery flee the field decides his armies position is untenable, and rides out to meet Field Marshal Cliffel and surrender his sword, lest his army is utterly destroyed.

The battle presented here was played using a DBA variant called DBN written by Alex Testo and Bob Carter.  It is available as a download here:  http://www.dbnwargaming.co.uk/
The troops are 15mm miniatures played on a 30" square board.
Posted by David at 8:05 AM No comments: