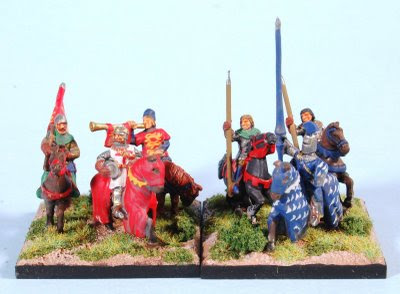 The Robin Hood HotT army was this year's HotT Wax tournament prize painted and provided by David McBride at Splintered Light Miniatures. I wanted to rebase them just so they would be consistent with my own style, especially since I wanted to add a couple of Hero elements which you can see above. These are Essex miniatures and represent Richard the Lion Heart and Ivanhoe. They can be played as heroes or knights. I also wanted to rearrange the character figures of Robin Hood and Maid Marian etc. In the process of rebasing I decided to darken the skin tones a bit just to fit my personal taste.

The peasantry - eight elements of warband. 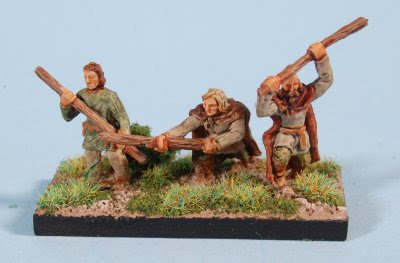 These are great figures in wonderful dynamic poses. It took a bit of doing, but I rearranged the figures so that none of the staves were sticking off the ends of the stands. 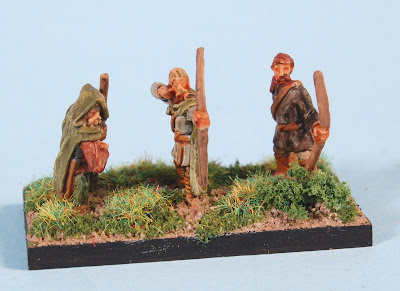 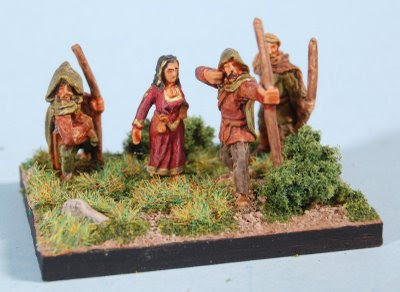 A closer shot of Robin Hood with Maid Marian. I wanted to use some gold in her outfit to distinguish her as being of noble birth and a bit out of place with the woodsmen. She even has some gold braided through her hair, at least that is what it is supposed to look like.

The Narnians emerged victorious from the field of battle in Columbus Ohio. HoTT Wax was a blast, with twenty participants all sporting some magnificent armies. With a lot of help from the die, I took first place and came back to Nashville with a nicely painted Robin Hood army courtesy of Splintered Light Miniatures and David McBride. The die gods were giving me good Karma for making the long drive with Terry Webb and Paul Potter. Many thanks to David Zecchini for all his efforts to put Hott Wax together for us! 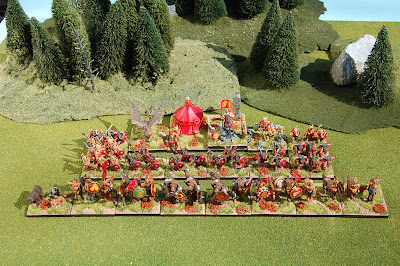 hopefully the final iteration of the Narnian army! I had enough elements to pick and choose from this fairly massive army that I was able to pick a winning combination. My tournament army consisted of 1 hero, 1 beast, 1 flyer, 2 behemoths, 2 knights, 1 rider, 2 warband, 2 spears, and 3 shooters for a 36 AP army. 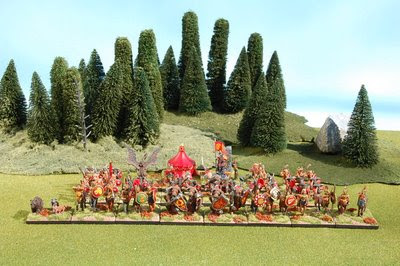 A view of the Narnian host from lower down. I opted not to use the magician, or paint Aslan as a god element due to the vagaries of fate from which these elements can suffer. 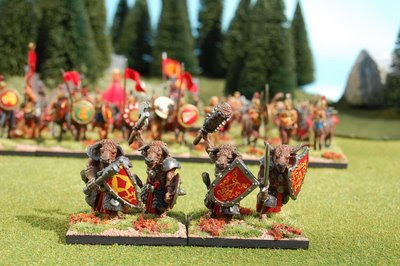 I fielded both of these behemoths and they played a crucial role in almost all my victories. I finished them just hours before we had to leave, and I was extremely glad to have pushed to get them done. These are wonderful Splintered Light castings. 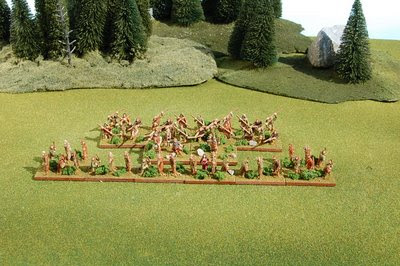 To the victor goes the spoils, which in this case was a wonderful Robin Hood army painted by none other than the proprietor of Splintered light. Thanks David! 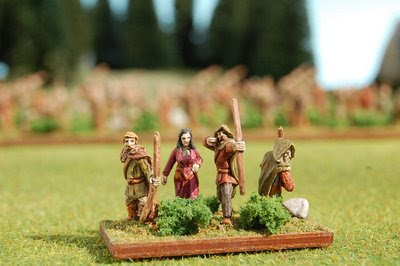 Maid Marian and Robin Hood with some of his gang. I may remount this as a Hero stand, but I'll have to think about that for a while. 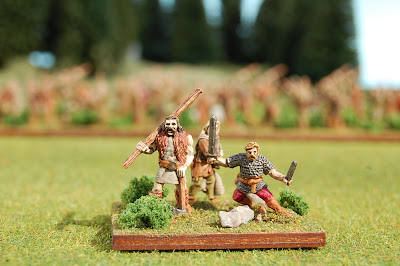 Will Scarlet, Little john and the Minstrel Alan a Dell. 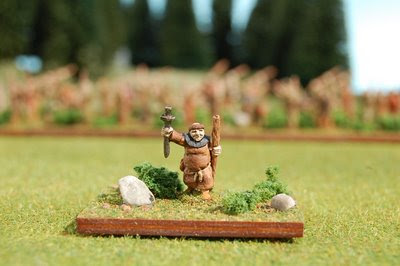 Of course no army with Robin Hood would be complete without Friar Tuck! Great fun at HoTT Wax. Thanks again for all who played and put this wonderful tournament together.
Posted by David at 10:29 AM 4 comments:

My friends and I have decided to make a road trip up to Columbus Ohio to join the fun at HoTT Wax. The powers that be have decided we will be using 36 Army points instead of the usual 24, which has inspired me to actually finish painting the rest of the wonderful Splintered Light figures I got at last year's Nashcon in May. I have added several elements of satyrs and a flyer. I'm also currently painting a couple of elements of minotaurs which I will play as behemoths if I can get them finished before Friday. Here are the results of my efforts:

Here we have the satyr warband. The figures are a tad large and might have fit on a 20mm deep base, but as I had to use a deeper 20mm base for the elements of 4 spear, I decided to go with a deeper 30mm base to make it more apparent that these were warband and not 3 blade. 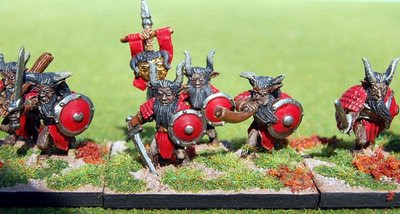 The warband general. I'll probably play him as a regular element and have my hero stand or centaurs be the general's element.

Here we have 2 elements of satyr shooters and a spear. These will mix well with their faun brethren to give me three elements of spear and three elements of shooters, which I hope will be enough. The spears are a great all around element, but they are slow in comparison to the rest of the army, so they may get left in the box if I have enough Army points to do so. 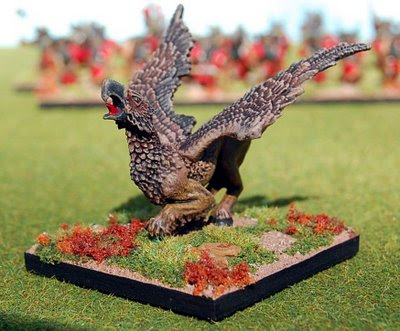 This is one of the smallish Ral Partha griffins from the 1980's and as such, he mixes well with the Splintered Light miniatures which tend to be a bit on the big side. I'm not a frequent HoTT player, so learning how to use this guy to my best advantage will be a challenge. I figure I've got five hours in a car with an expert HoTT player, so I hope to pick his brain for some strategic hints. Looking forward to seeing everyone at HoTT Wax.