I thought it might be a nice diversion over Christmas break to work on something other than DBx type figures, so I brought out some Fallschirmjager from WWII that I have been slowly collecting. My good friend Baxter Key from Wargames Inc manufactures these FAA figures, so every now and again I pick up a pack, especially when I'm feeling guilty for making him work on a Saturday so the rest of us can game. I also finally painted an Italieri King Tiger that has been primed in my ready box for quite some time. I've been thinking of trying the WWII skirmish game "Nuts", and now I'm ready to do so. 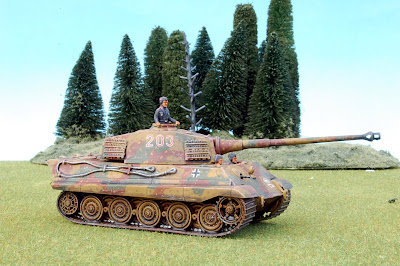 1/72 model kits can be a little hit and miss, but this one was quite a nice kit, and included the two drivers and tank commander which was a nice bonus. I gave the airbrush a rest on this one, as I have never really gotten very good at using it, and just brushed on the paint. I tried to keep the paint nice and thin, but heavy enough to provide good coverage (I used Polly S paints as they have great pigmentation even when thin), and the end result was pretty good. 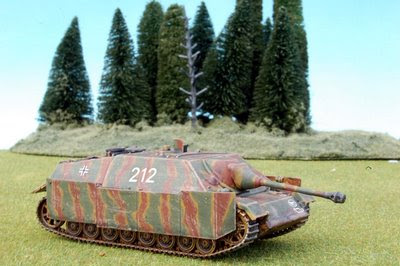 I also painted up a Dragon kit of a jagdpanzer IV. This is a great kit, but I never did get the gun at a nice elevated level and the paint job was a bit to dark and heavy, but all in all, an acceptable job. I like to think of it as a well distressed model. 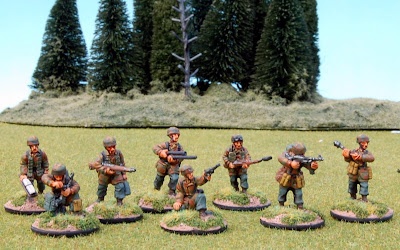 FAA Fallschirmjager engineers. I bought this pack thinking it was a rifle squad, but oops. I'm still glad I have them though and they are some really great figures in different and nicely animated poses. 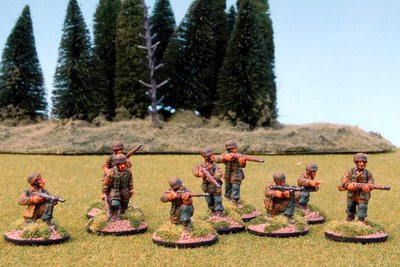 The grunts: Three packs of assorted riflemen. Once again some very nice figures in great poses. 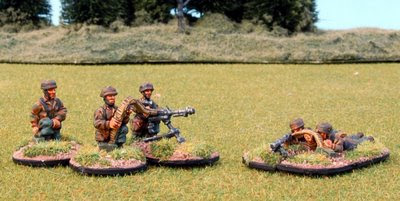 Heavy and medium MGs. The MMG in the prone position I based on two separate halves of an oval to facilitate taking casualties. 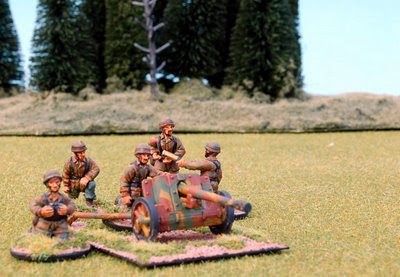 Pak 38 anti tank gun. It took a while to get this little booger together but the end result was good. I've always had difficulty gluing the pieces of FAA figures and guns together. I'll have to ask Baxter if he uses a special release agent or something. It could also be that I'm just lacking in patience. This was a fun diversion, but now on to the serious business of the Prussian 1806 Gendarmes of the Guard for DBN!
Posted by David at 2:52 PM 2 comments: 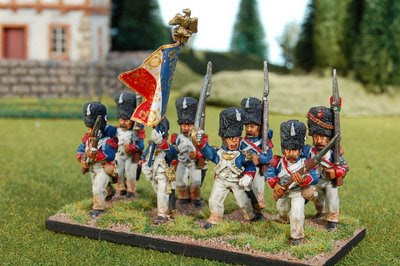 I have been working on a few DBN elements over the past couple of months and thought I would share the results. First up: The Old Guard - Chasseurs a Pied 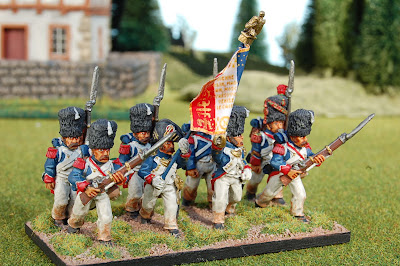 I got these figures from a friend at a great price and trade, but unfortunately that means I really don't know what manufacturer these figures are from. I thought they were Foundry, but I've been told they're Dixon. In either case they were great figures. The figures were actually Grenadiers of the Imperial Guard, but I filed off the square cuffs and painted on the chevron cuffs, and used epoxy putty to cover up the bearskin plates. Most are in Campaign dress, but the NCO on the end decided to dress for the occasion, at least in his choice of headgear. 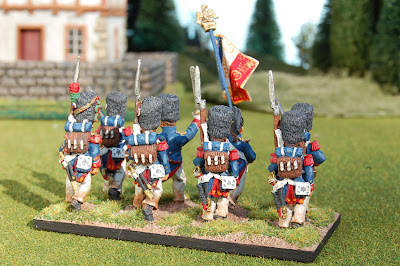 The flag is a free download from warflags, which I used as a template, over which I painted the flag just to add a greater vibrancy that I get from paint as opposed to inkjet prints. Note the pouch covers, which is a dead giveaway for the 1815 period. 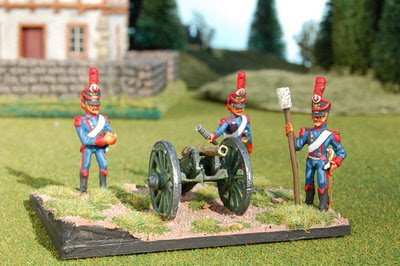 These are some old Hinchcliffe figures that I got on ebay and represent a battery of horse artillery. This element was a real challenge. The figures were badly painted and I had to strip them completely and start again. The gun itself was a howitzer and the carriage was so poorly assembled I had to chissel out all the old glue, strip the paint and start over. The howitzer just looked goofy so, with apologies to a certain figure manufacturer, I made a plaster mold of a gun barrel and cast my own. (I don't feel too guilty about this as said manufacturer has waaay too much of my money) I had never tried to make a mold and cast my own lead, and though the results were acceptable, I don't think anyone has to worry about me becomming one of the dread figure pirates. It was fun to try at any rate. 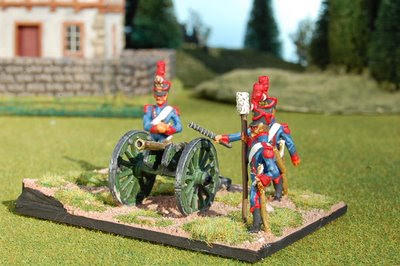 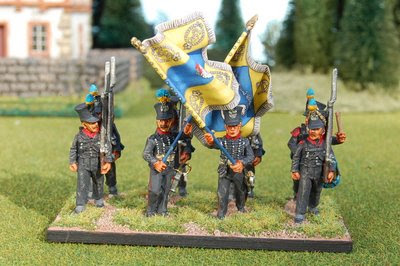 The Perry's make the best figures out there as far as I can tell. They are a joy to paint and I have always been pleased with the result. Here is an element painted as the 1st line battalion of the Brunswick army in 1815. The flags are by GMB Designs. 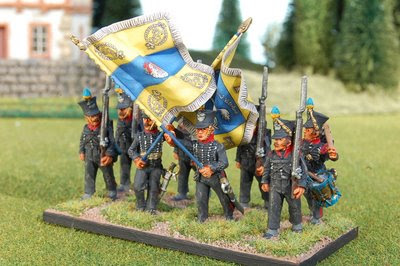 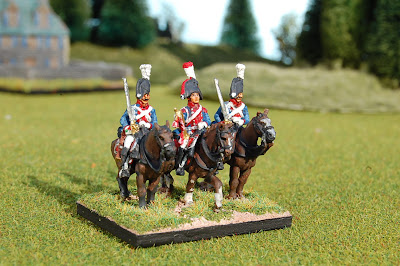 Lastly I have some 15mm 1806 Prussian Dragoons by AB miniatures. These were fun to paint and almost complete my Prussian army. 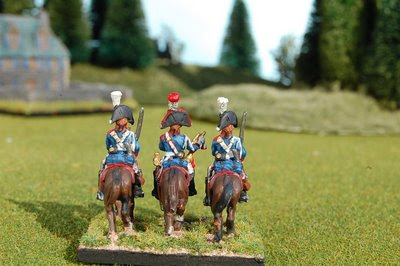 It's a funny thing, but I think these figures almost look better form the back, which is a good thing, since as their general, I rarely get to see the front of the figures!
Posted by David at 10:16 AM 1 comment: 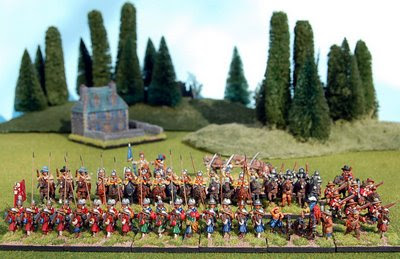 Much to my chagrin I found myself sucked into painting an English Civil War (ECW) New Model Army, with a few additions so that it can be played as a Parliamentarian army as well. A good friend found the miniatures at a great price so I couldn't say no. The figures are 15mm Donnington sculpts, which though not award winners, actually paint up quite well. So far this army has only made it onto the field once, and are undefeated, but Prince Rupert and his goofy poodle are gunning for revenge. 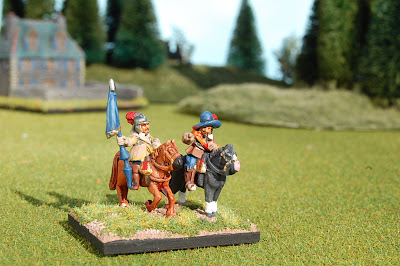 The General element. He looks a little to dashing for Cromwell, so I will probably alter the banner a bit to make him represent Lord Fairfax. 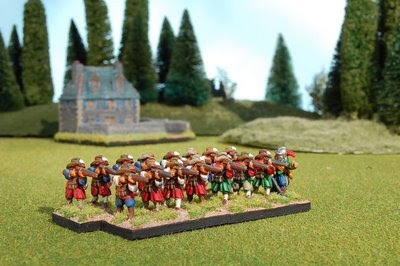 The shot elements - two in red, and for the Parliamentarian addition, one in green and one in blue. 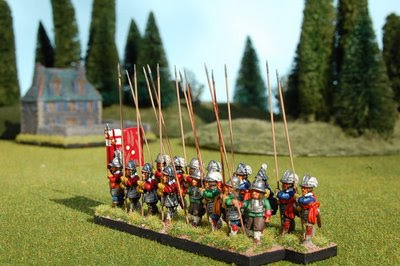 The supporting pike elements in the same colors. 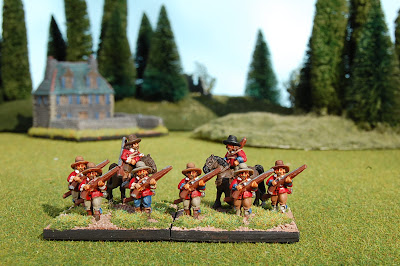 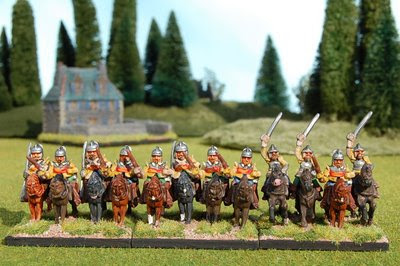 The new model knight elements which can be played as knights or as pistoliers. 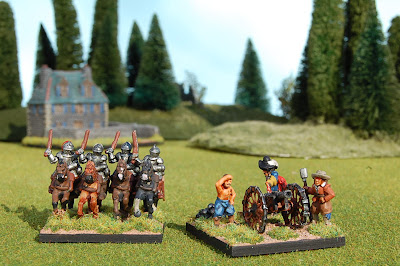 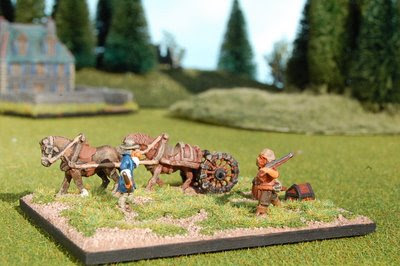 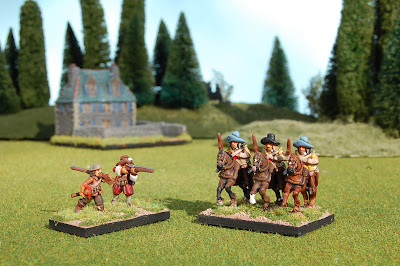 A special thanks to Terry Webb for finding these figures and getting me interested in the ECW. Thanks also to Blake Radetzky at Pendraken USA for picking out some great figures for us and giving such a great deal and service.
Posted by David at 8:51 AM No comments: