Last weekend I spent a lonely Saturday at home trying to teach myself Muskets and Marshals.  Beer was consumed, little toy soldiers were deployed, and many dice were rolled.  All went well except for a lopsided French win, and a dining room table filled with soldiers when dinner time rolled around. This weekend however, I took the show on the road to a meeting of our local gaming club and the stage was set for a rematch. The overwhelming French win made sense in retrospect given the troop quality of the units involved, so I endeavored to make it a little harder on the French.  So now we arrive at the battlefield deep in mother Russia.  The cream of the French army looms on the horizon and advances up a remote valley to the sound of the pas de charge. 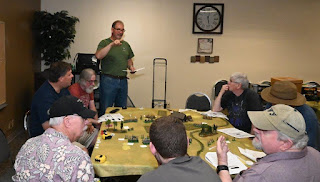 First a quick orientation to the game. 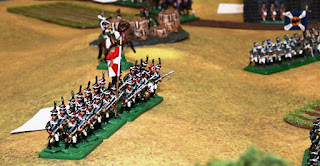 Russian Grenadiers line the hillside, flanked by an artillery battery protected by a hastily constructed wall of  Gabions filled with precious Russian soil.

Approaching in column is the pride of the French army, the Fusilier-Chasseurs of the Middle Imperial Guard flanked by the 17th line battalion.  Colonel-Major Pierre Vrigny exhorts his troops to advance up the valley. 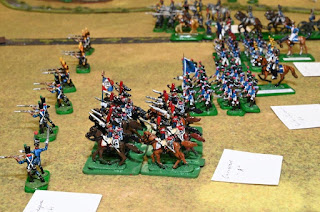 The Fusilier-Chasseurs are screened by two companies of the 25th Legere and flanked by a regiment of Heavy Cuirassiers. To their right the 6th Legere advances next to a large battery of eight guns still limbered and approaching up the main road to the village.  To the right approaching the woods are two more companies of the 25th legere. 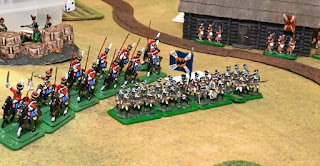 As the French advance, the Imperial guard cossacks are drawn forward by the exposed line of skirmishers leading the French assault.  Russian Canon deliver an astonishing volley of roundshot into the midst of the French battery still struggling up the road.  Horses and men are tossed about like kingpins and the French have suddenly lost three of their eight guns in the resulting carnage.

The view from the Russian guns. 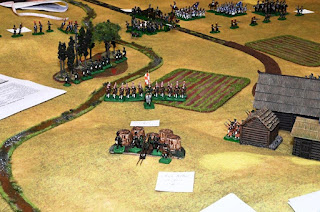 Russian jagers on the far left move to engage the 25th Legere in a hard fought battle for the woods on the left flank. 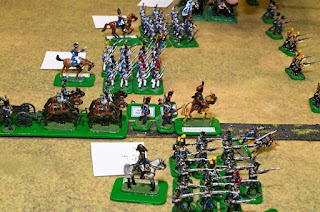 Despite a few trifling casualties to the infantry, the French forces continue their advance and the guns finally work to deploy out of the mass of entangle horse flesh.

As you can see we had a great turnout! 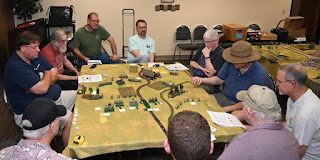 Moments before the clash... 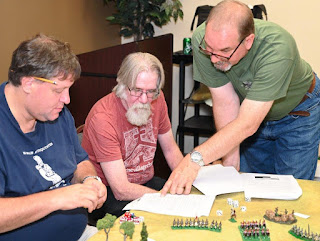 Final rules consult before the charge and then the die was cast - literally. 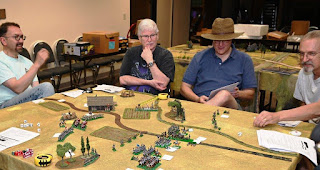 The Cossacks can't contain themselves any longer, form column and charge the skirmish line, hoping to ride it down and engage the enemy behind, which are still not in square.

For a moment it seemed the French luck would hold.  The Cossacks scattered the skirmishers who were able to evade and flow back around their battalions of infantry.  The 17th line battalion formed square just in the nick of time and suddenly the Cossacks found themselves in a world of hurt.  They retreated disorganized. The Cuirassiers counter charged, but didn't have room to gain charge momentum.  Even so they cantered into the disorganized Cossacks who had failed to rally and smashed them utterly. 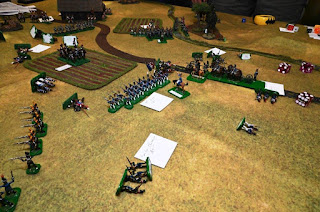 The cuirassiers, victory emblazoned on their shiny breastplates, can't hold back their manly vigor and decide the time is right to charge the guns - up a a hill - behind gabions - in canister range.  Needless to say it was ugly and both sides now found themselves effectively without cavalry support.  The charge of the Cossacks had one important effect though.  As the Fusilier-Chasseurs advanced, they now found themselves without skirmishers in front to screen them from Russian musketry, and soon were taking fire from the Grenadiers on the hill and Russian jagers in the woods on their left, all while another Russian line battalion was advancing to support the Grenadiers.

On the French Right the 25th Legere had cleared the woods of Jagers, and the 6th Legere had routed the Pavlov Grenadiers, leaving both sides exhausted and their troops depleted.  It was too little too late though.  Just as the French were breaking through on the right, the Fusilier-Chasseurs, after taking tremendous casualties charging the grenadiers on the hill, finally broke and ran sending a shiver through the entire French army.  General Maucune realized his brigade would never be able to clear the town or push off the Russian artillery which was still sending roundshot into their depleted ranks, so sounded the retreat to save what remained of his once mighty brigade. 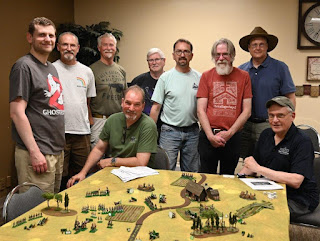 We started this game at noon and fought it to a conclusion by 2:30.  The Muskets and Marshals rules were seemingly easily grasped and players were on their own very quickly, with very little coaching needed.  Mike Peccolo, who had only read the rules once, kindly offered to help run the game since we had so many players.  It is rather embarrassing to admit his knowledge of the rules was better than my own despite my test game! I also need to give a shout out to David Raybin, who photographed the game while playing and setting up his own game of the Sword and the Flame that we ran afterwards.