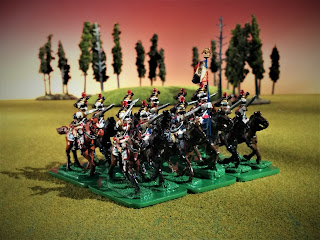 At the Siege of Augusta convention I was fortunate enough to find a large lot of Der Kriegspielers miniatures for sale at a bargain price.  They were adequately painted so I am endeavoring to touch them up as best I can without doing a complete repaint, to get them ready for the table top. 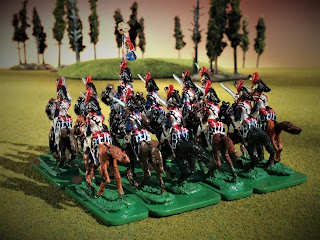 First up is the 1st squadron of the 2nd regiment of French Cuirassiers.  Thanks to Matt in New Zealand for the additional cavalry to complete the regiment.
http://thehintonspieler.blogspot.com 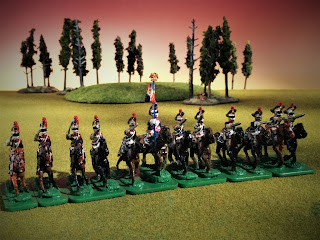 The standard bearer in the middle is a converted officer but I am unsure of the make.  He is similar in style and size to the Der Kriegspiers / Hinton Hunt figures, but the base is enormous, being almost a full 1/8th of an inch think.  Anyone know what manufacturer he might be from? 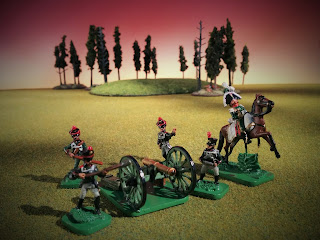 Here we have a foot artillery battery, with what appears to be a Russian gunner wearing a French shako.  The gun itself is plastic, so I have added a few details to the stand to try and distract from the simplicity of the gun carriage. 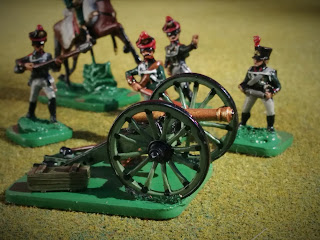 The crate is a 20mm scenic detail from the WWII FAA line, but looked universal enough to fit in. 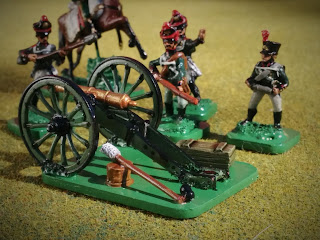 The water bucket is a filed down 28mm French Shako and the sponge is an old lance with the sponge sculpted from epoxy putty, as well as a couple of epoxy putty round shot. 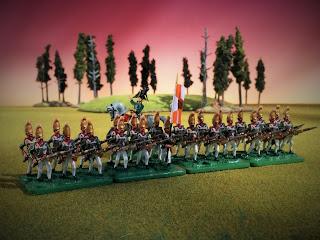 No Russian army would be complete without the Pavlov Grenadiers.  This is the first battalion and I will model the third battalion down the road, but it may require a complete repaint so is likely to be some time before joining the fray. 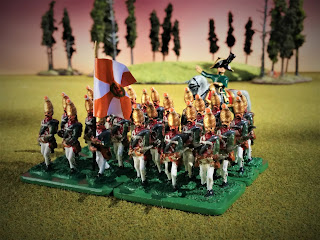 The Standard bearer is a converted Musketeer which has been decapitated and then had a grenadier head added.  The cast on flags are so large and heavy for the Russians, that I decided it would be best to replace the staff with a wire spear and make a paper flag.  Thanks to the folks at Warflag for making the downloadable flags!  I just print them in black and white and paint over them.  Makes a really nice template for painting the flags.
http://www.warflag.com/napflags/flaghtml/russindx.htm
Posted by David at 8:46 AM 9 comments: