An Eclectic Miscellany of Completed Figures

Over the last few weeks I have finished a number of smaller efforts so thought it might be fun to feature them in a quick post.

First up, the 2/24 Warwickshire Regiment of Foot

Fortune is a fickle mistress, and in the final hours of the battle she abandoned the General de Brigade of the French force for the greener fields of Britain.  General Antoine Maucune (playing the role historically assumed by Delaborde) attempted to rally what was left of the French 39e, only to be carried away, along with the remnants of the Chasseurs, and was not seen again.  While the French sought vainly to rally their troops all along the battle line, only the Hanoverians remained as a formed battalion, but as they charged out of the woods to meet the threat of the 92nd Highlanders they were meet with the unexpected crash of musketry and the thundering boom of artillery... 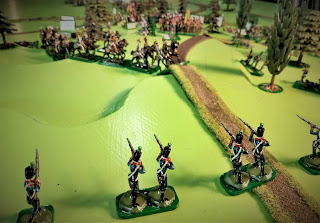 Only a thin line of skirmishers from the 2nd Battalion of the 6e Legere remains to protect the French troops routing from the field.


Most especially I want to thank Wellington Man of the Hinton Spieler fame (https://thehintonspieler.blogspot.com/), for his guidance, patience, and an unexpected friendship that developed from all the way across the world.  Through all of the hiccups with the map, miss-reads of the rules, and my struggle with accurate numbers, he was the most gentlemanly and delightful opponent.  Till next time WM!

As the Victor in this affair, he of course has the right to compose the victory dispatch.

An engagement took place near Rolica on the 17th of August against an enemy force under General Delaborde, who occupied a wooded slope just outside Columbeira. On encountering the French, your Royal Highness's Portuguese allies muttered something about 'making a strategic pincer movement' and then swiftly disappeared. The victory was thus secured entirely with the British forces under my command.
The infantry were victorious at every point, with the sole exception of the 42nd, who appear to have lost their way in the woods, only to re-emerge looking somewhat flustered and facing in the wrong direction. At no stage were my forces inconvenienced in any way, although the 58th had neglected to tie their shoelaces and were momentarily delayed.  Realizing his error, Lieutenant-Colonel Buckby quite correctly took the only honourable course and has been buried with full military honours. The victory would have been all the swifter had not General Delaborde been borne away by his fleeing cavalry while attempting to surrender.
It is my sad duty to report that the unimpeded progress of the infantry was unaided in any way by the Royal Artillery, who declined to advance, preferring to spend the engagement bowling over harmless trees. As I have said before and will no doubt say again, this disgraceful insubordination is only to be expected for as long as they remain under the exclusive control of that bumbling Poltroon, the Master General of the Ordnance.
I look forward to unwrapping my dukedom by return of post,
I am, etc.
Wellesley