Unboxing the Tennant Collection and a New Fancy Home for Them!

The Tennant collection of approximately 2750 1/72 Hinton Hunt miniatures, all exquisitely painted, have been calling to me in dismay that they have not been released from their shipping containers for more than a few moments.  The wait has been too long, but at long last I have found a suitable display, and with spousal permission to customize our study into a display space for my collections, the time was ripe to set them free! 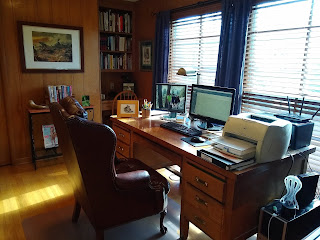 To properly display such a wonderful collection, I first needed to spruce up the study.  Changes include blinds for the massive windows to help with reflections on pictures and the display cabinet opposite the windows.  Additionally, to open up the room, I relocated a dark secretary type cabinet and replaced it with a more open shelf and a framed print from the battle of Nashville. 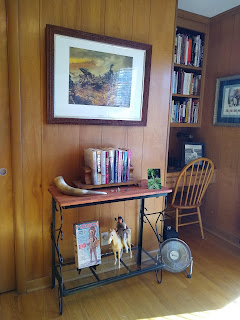 My wife Cindy encouraged me to keep at least some element of whimsy in the room, so below the bookshelf is an old Marx 12 inch action figure of Geronimo, that I have hung onto from the days of my youth.  I did have to find a deal on the box with the accessories as most of mine had been lost through the ages. 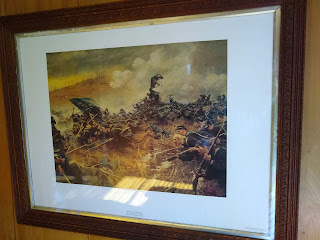 Howard Pyle is a favorite author/illustrator of mine and I was pleased to find he had painted a mural for his home state of Minnesota of the Battle of Nashville, where Minnesotans fought for the Union. 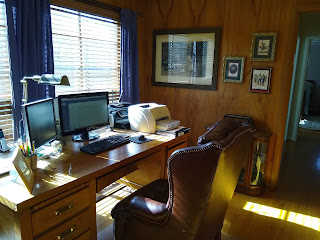 On the opposite wall I placed a print of Jules Giradet's
Marie Louise of Austria and Napoleon Bonaparte with their son, Napoleon II, that actually came from my wife's grandmother.  Cindy always hated this print so was only too glad to get it out of the dining room where it has been for probably 15-20 years. 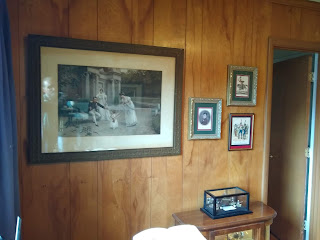 In addition there are a few framed notecards of a French Hussar and a young Napoleon, as well as a  Knotel print of troops from Hesse-Darmstadt 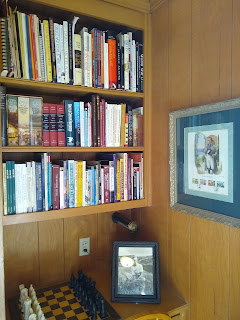 Tucked away in a nook of the study is my modest library of reference sources and the like, next to a neat framed first day of issue postage stamp release from the Isle of Man in honor of Colonel Mark Wilks who was Governor to St. Helena whilst Napoleon was interned on the island. 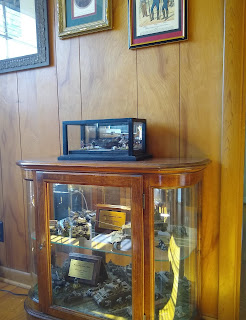 Below the artwork is a small display of some WWII modelling I did, that was actually the source of my re-engagement with this hobby in my middle age. 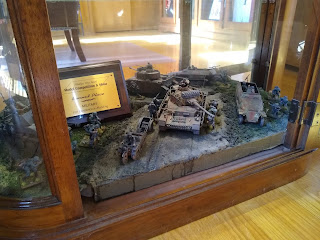 I custom built a small insert for the display case so the panzers would have some suitable terrain to roll over. 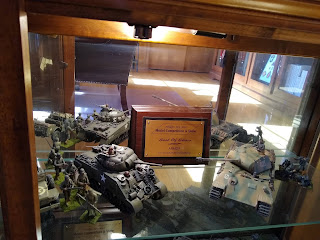 These were in the bedroom for years, and as I am sure you can imagine, might dear spouse was happy to see them depart that room! 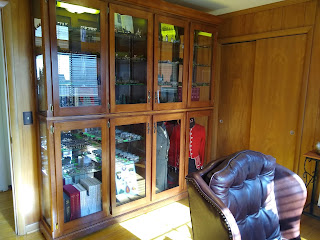 Against the back wall is however the central focus piece of the room, not only for its sheer size, but also for what it contains; the Hinton Hunt Collection of Richard Tennant - with a few of my own snuck in as well...  Below are a series of photos that I hope will show the sheer scope of this collection.  I will not attempt to detail the contents but will just let the collection speak for itself. 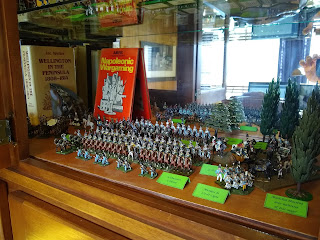 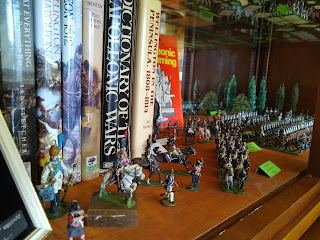 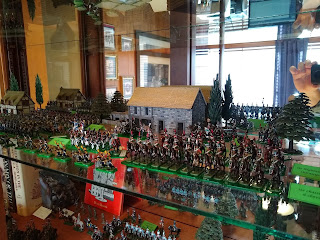 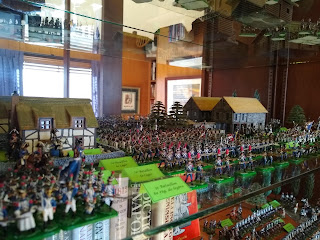 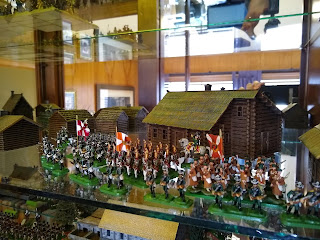 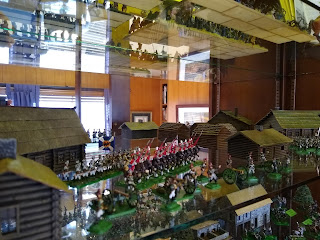 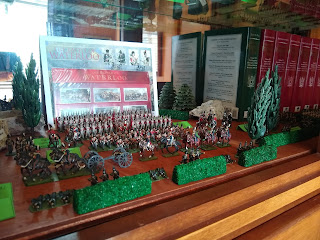 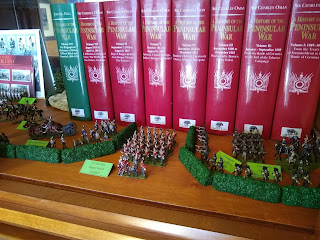 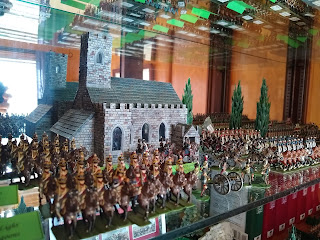 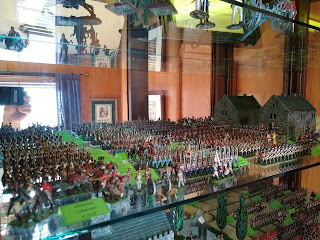 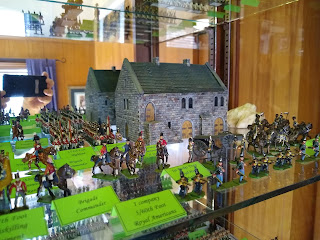 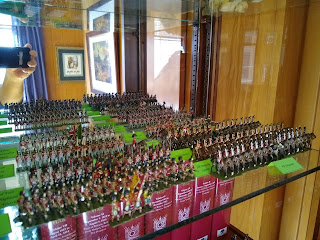 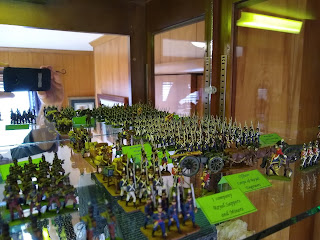 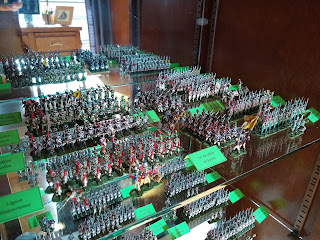 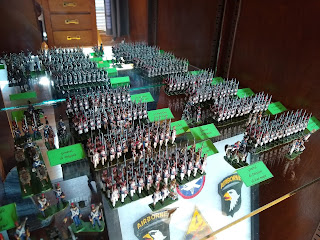 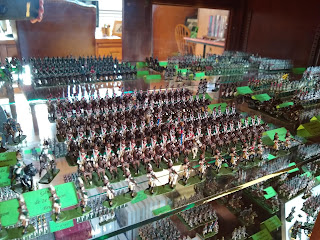 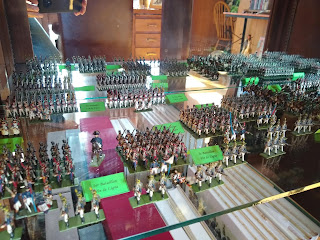 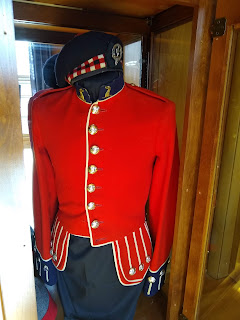 Despite the huge collection of miniatures, there was still enough space to display a couple of uniforms that were a gift of a dear friend.  Above is a jacket of the 48th Canadian Highlanders, who are affiliated with the famous Gordon Highlanders. 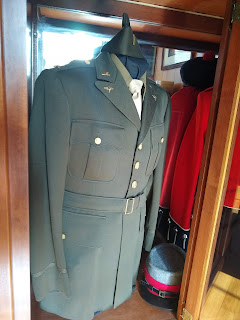 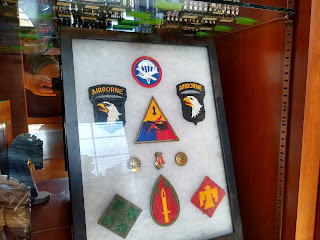 And finally a smattering of patches from American units in WWII.